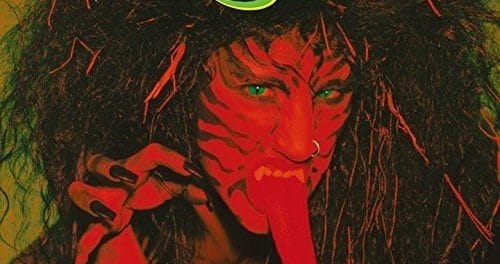 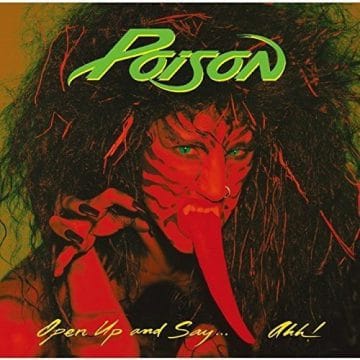 Review:
One of many fond memories being in junior high school was my recent love of professional wrestling, going to school dances, and practicing playing my drums thinking one day I would be either in a local band, or if luck would have it, be on MTV playing in a major band touring the world. Even though I made it to many local bands, touring the world did not happen. However, like many musicians at this time, the soundtrack of our youth at the time was the so called glam rock that was blasting through the local radio stations, along with dominating MTV at the time.

One of the cassettes I wore out at this time was Poison‘s second release, Open Up and Say… Ahh!. At first, I remember the original cover art work of the album (which has been put back on certain CD covers), which featured a Medusa-looking creature with her tongue sticking out. Many retailers did not carry the original cover, so a second one was made with just the eyes of the creature being seen. I bought at least three to five copies of the cassette within the first several years of its release, due to wearing it out from overplaying, or to taking it to school to listen to during recess (someone always had a boom box ready to blare the tunes), where someone always swiped people’s copies of music. I would practice playing along with the cassette many times in my bedroom, while other schoolmates were listening heavier acts. Although Poison were deemed “girl rock” at my school, due to the girls having a crush on singer Bret Michaels, I didn’t care. I loved the album.

The album kicks off with “Love On The Rocks,” with a sleazy-blues intro, which makes a good opener with the backbeat of drummer Rikki Rockett‘s straight ahead, steady beat kicking in. The second track, “Nothin’ But A Good Time,” was the staple of the album, thanks to the constant MTV play of the video. The first single released of the album is considered one of the best party songs from the decade, appealing to anyone who was carrying a job at the time, wondering what to do after work on payday. The song, to this day, still gets people on their feet when played. The third track, “Back To The Rocking Horse,” is one of the more underrated songs in the whole Poison catalog in my opinion. This was one of the songs I worn out listening to on the album. Like many glam rock bands of the decade, the cowbell keeping time with the strong backbeat helps the song in the opening. The theme of the song is more relevant today, with us fans of the 1980s music wanting to go back to a “simpler time” and listen to feel good music.

“Good Love,” the next track, with singer Bret Michaels showing some blues harmonica skills, was a shock to hear the first time for a glam band. The harmonica was more featured by bands like Huey Lewis and The News in the 1980s, and a hard rock band using it made me like the song even more. Bret‘s vocals on this song are softer in this song, blending nicely with the groove of the song. The next two songs, “Tearin’ Down The Walls” and “Look But You Can’t Touch,” are the typical 1980s sex lyrics that the glam bands were known for in the time. If there were fillers on the album, my choice would be these two, just because it is just typical glam rock songs. Track seven, “Fallen Angel,” was another favorite of mine on the album. The second single released, which hit the Top 20 in the U.S. about a girl moving to L.A. and who abandons her old life from her small town to make dreams come true, is a theme to many during this time, from trying to break into movies, modeling, or music. Everyone had dreams of going to L.A. to “make it big.” This is still one of my all time favorite songs by the band.

Track eight is the song that really put the band into the next level, with “Every Rose Has It’s Thorn.” This song has been covered by country acts to pop artists, and is possibly one of the most overplayed songs from the decade. However, listening to it now, the drumming is still nice on the song. This is one Poison song I click off when it comes on, but one can’t deny the success of the ballad. It has made it through the decades, also thanks to the many versions of the song Michaels has put out on his solo releases. Although I prefer “I Won’t Forget You” (from the band’s first album) as a favorite ballad of the band, this is the song many remember them by. “Your Mama Don’t Dance,” the Loggins and Messina cover, was another big hit for the band, reaching the Top Ten in the US. Some people hated this version when it was released, but I think it is as good as the original. To me, the original sounds dated, as opposed to Poison‘s version (although they are both great).

The album ends with “Bad To Be Good.” The song starts off with an eerie slow start, with some percussion from Rockett that just seems weird fitting in. When the song kicks in after the first verse, the song gets the normal Poison groove to it. The song is the second longest of the album, coming in at 4:08, which still isn’t too long. To end the album, this may be a little weak, especially at the end of the song, which just stops with no major big ending, or a loud guitar riff, but with the short length of the album, one can’t complain too much.

Overall, the album is still as good to me as it was when it first came out. I still like the deeper tracks on the album, like “Back To The Rockin Horse,” and “Good Love” just as much as “Fallen Angel” and “Nothin But A Good Time.” Open Up And Say… Ahh! was not only the album that really broke the band into mainstream rock, but it is also holds up even today. Although a few songs on it could be considered fillers, the length of the album is short enough (the run time is under 37 minutes) that the listener isn’t lost in the album as a whole.

Poison – Nothin’ But A Good Time

Poison‘s “Every Rose Has Its Thorn” video:

Poison – Every Rose Has Its Thorn

Music video by Poison performing Every Rose Has Its Thorn (2001 Digital Remaster).