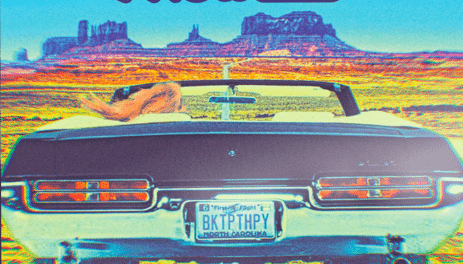 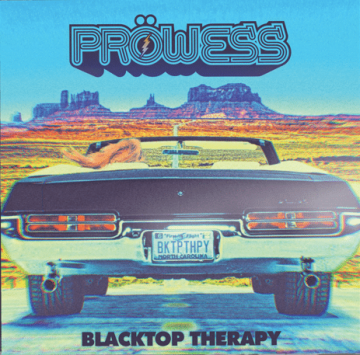 Review by Daz:
In my review of Pröwess’ 2018 Rollin’ With The Punches, I noted that the EP was a significant reward for the band considering the many challenges and obstacles they had faced leading up to its release. Appropriately, the band had lived up to the definition of the term ‘prowess’ which interprets as: 1. skill or expertise in a particular activity or field. 2. bravery in battle. In what could be considered a relatively calm period for the Pröwess camp since the EP release, with the only real issues being the failure of their tour vans heating system and the splitting of a seam in the van wall during a winter run of shows, the band has been able to forge ahead with the writing and recording of their debut full-length album seemingly unhindered.

Personally, I make it no secret that I have been a Pröwess fan since day one because of my passion for American hard rock that is mixed with a tinge of that southern feel. I thoroughly enjoyed both of the band’s prior EP releases, and I enjoyed witnessing their musical and songwriting progression between those releases. So to say that I was highly anticipating the release of Blacktop Therapy would be an understatement.

Enlisting the assistance of Tuk Smith, most notably known as the frontman for former Atlanta rockers Biters, to produce and co-write some of the tracks on Blacktop Therapy, Pröwess have taken things to another level and have produced an album full of stellar hard hitting, blow your face off, rock anthems. Make no mistakes, this is not the Pröwess of old. This is a new streamlined version, which has stripped away the fat and consciously decided to release shorter songs that will make the listener hungry for more. Whilst the songs may be shorter and the lyrical topic matter not necessarily as serious as previous efforts, the band has not alienated its existing fan base and continues to retain that southern feel and swagger. If anything, the style of Blacktop Therapy is going to appeal to a much broader rock audience.

Blacktop Therapy opens with the title track which immediately gives us our first wow moment when the intro riff kicks in — showcasing the album’s crystal clear production qualities. The song grooves along with a ’70s inspired riff which is complimented by stagnating notes and an irregular drum beat during the verses. “Lookin’ For A Bullet” is next and was the second single released from the album. It’s a no holds barred straight up rocker with a catchy chorus and a well thought out structure. Sound wise, the short guitar solo gives off a Thin Lizzy type vibe whilst the pounding drums and their transitioning passages have a primitive tribal feel. “Every Right” follows and continues the album’s ferocity with another straight up rocker containing another catchy chorus. The song is a lot of fun and a definite fist pumper. The main riff has a slight AC/DC vibe to it but the pace of the song and the extra nuance guitar notes put Pröwess’ own personality to the forefront.

“Eyes of The Hunter” brings the groove with another highly inspired ’70s riff. It’s a somewhat change of style when compared to the previous songs, so it’s refreshing and nicely placed in the overall tracklisting. The song doesn’t rely on pace but rather a riff dripping in bottom end and a sound that is quite familiar, even if I cannot remember the source — maybe a touch of Led Zeppelin. “Tombstone Blue” is next and provides us with another wow moment. It’s hard to define the song. If I called it a ballad, then by my own admission I would have to hate it, but I don’t. It’s fantastic. It’s nowhere near being a ballad, yet it’s also probably just as far away from being classified as a straight out rocker. Either way, I would regard it as Pröwess’ crowning moment on the album, showing that they are not just a one trick rock pony, but versatile enough to be influenced by many styles of music, and able to successfully incorporate those influences into their own music. The intro’s calm soothing atmosphere has a country vibe and the addition of blues inspired lead guitar fills provides a lovely ambience. When the song eventually kicks in, we are instantly taken on a trip back to the ’70s with a song that fits nicely into the classic rock niche influenced by the likes of Lynyrd Skynyrd and the Allman Brothers. As for the chorus of the song — it’s just sensational.“Heart’s Desire” follows and is similar to “Eyes of The Hunter” with its highly inspired ’70s riff. The chorus displays a nice layering of background vocals providing a lot of depth. In addition to being so catchy, it will have you singing instantly. There is also a breakdown section after the guitar solo which incorporates some Robert Plant inspired ah-ah’s that are quite effective. “Bring Your Love” was the first single released from the album and returns us to straight up energetic rock. It’s another well structured song, with plenty of melodic guitar, a thundering bass line and of course, another memorable chorus. One of my favourite songs is up next in the form of “Welcome Home” — a scorcher of a rocker with some really great lyrical content. Whilst it probably won’t have as much fanfare as the singles or other songs on the album, its grittiness and honest storyline about a tragically lonely life is captivating and heartfelt. Once again, the guitar work and melodies are superb and I really like the high pitched rising notes in the bridge which climax at the chorus. “All Downhill” closes out the album with a final riff onslaught and an unrelenting drum beat, reminding us that Blacktop Therapy is an unapologetic rock album that deserves to be played loud.

Production wise, Tuk Smith has done a phenomenal job making all the instruments sound monstrous, including the vocals. The rhythm section feels really tight, resulting in each song having a full and pumping bottom end. The guitar tones are also exquisite and even with the occasional use of effects and distortion, they still sound real, having the freedom to breathe and sustain.  Overall, Blacktop Therapy has exceeded my expectations and makes me excited for what the future holds for Pröwess. With a total of nine songs clocking in at just over thirty minutes, the album might seem short, however that only makes you want to hear more. The album has remained on heavy rotation in my household since I received the promo copy and I don’t see that ending anytime soon.

Review by Olivier:
A new decade has begun and it seems that Sleaze Roxx is starting it on a strong basis with a review of an album that could legitimately finish in the Sleaze Roxx’s Top Ten Albums of 2020. Obviously, it is way too early to make that call since there is still 364 days left to go in 2020 and lot of new music to listen to. That being said, I always make a mental note throughout the year of potential top 10 releases and this is definitely an album that will get some consideration at the end of 2020.

I have to say that I am surprised at the quality of the songs on Pröwess‘ debut full-length album. The main reason of course is that I was underwhelmed with the tracks on Pröwess‘ debut EP Headfirst, which was released back in early January 2017. Fast forward almost three years and this time around, Pröwess have come up with a real winner. Of note, there has been a major line-up overhaul in those last three years as only group founders Scott Roby (guitar), Dalton Bowes (lead vocals) and Kenny Keeler also known as Kelly Mange (bass) remain from the line-up that played on Headfirst. I am not sure exactly what is the reason for the way better songwriting that is offered on Blacktop Therapy but three years is a good chunk of time to improve on things, find the right bandmates and really gel. I do note that producer Tuk Smith (of The Biters) co-wrote four songs on Blacktop Therapy. The Pröwess line-up on Blacktop Therapy is rounded off with two newcomers — guitarist Curly Staples and drummer Brandon Chinn.

Pröwess continue with their old school ’70s styled rock n’ roll but have really shored up the weaknesses that creeped up on Headfirst. Three things pop to mind. The first thing is the background vocals. They were underwhelming at best and quite weak on Headfirst but this time around, they prop up Bowes‘ vocals rather than undermine them. The second thing is the chorus sections on the tracks on Blacktop Therapy are way more memorable. Often, such as on the tracks “Looking’ For A Bullet” and “Eyes of The Thunder”, you just end up hearing Bowes singing with very little instruments before the songs kick back in full gear. The third thing is Bowes‘ singing seems more dynamic and also a little grittier this time around.

Blacktop Therapy starts off with a simple but effective guitar riff for the title track and off we go. Most of the tracks have a great groove to them. The first four tracks are all excellent. “Lookin’ For A Bullet” was a great choice to get the video treatment as the track is built on an infectious guitar riff and is slightly faster paced than the rest of the songs on the album. “Eyes of The Thunder” is probably the highlight of the album with a great groove from start to finish. If you’ve read some of my past reviews, you know that I am not a ballad guy but “Tombstone Blue” is a cool track and surprisingly, it’s Bowes‘ singing that carries the atmospheric song from start to finish. You feel like Bowes is really telling (or singing) you a story. Very cool. Two of the best tracks on Blacktop Therapy are towards the end. Both “Bring Your Love” and “All Downhill” are faster numbers that each have some very old school Iron Maiden like guitar harmonies towards the end.

The one drawback with Blacktop Therapy is that I find that there is no true rock anthem on the record. That being said, you have nine solid old school ’70s styled songs that will have you rocking out all the way through. One of my barometers on whether an album is a good one, and even a great one, is whether I want to hear it again after just listening to it. Based on the amount of times that I have listened to Blacktop Therapy on a consecutive basis, it’s safe to say that this is a great record! The gauntlet has been thrown by Pröwess and the bar has been set nice and high. If you like old school ’70s rock n’ roll but with a fresher sound, Pröwess‘ Blacktop Therapy is just what the doctor ordered.

Reviewed by Daz and Olivier for Sleaze Roxx, December 2019

Pröwess’ “Lookin’ For A Bullet” video: