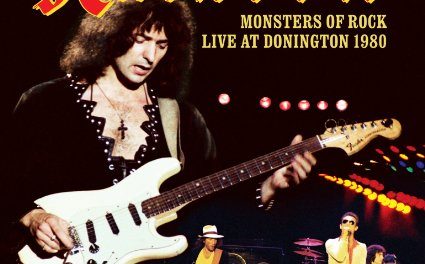 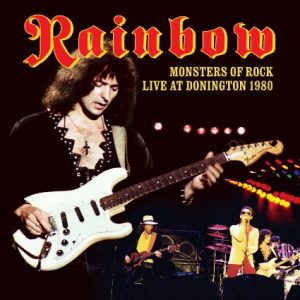 RAINBOW
MONSTERS OF ROCK LIVE AT DONINGTON 1980
To be released on April 22, 2016 (Eagle Rock Entertainment)

Review:
Before there was the bloated, yet eclectic Download Festival, there was the Castle Donington Festival or ‘Monsters Of Rock.’ With the renewed interest in Ritchie Blackmore’s work with Rainbow and Deep Purple over the years, Eagle Rock Entertainment has a number of great Blackmore releases. Hot on the heels of ‘The Story of Ritchie Blackmore’ DVD comes Rainbow‘s Monsters Of Rock Live At Donington 1980. While not as attractive as the Ronnie James Dio era or even as the Joe Lynn Turner era that came afterwards, the Graham Bonnet era did have its fair share of fans.

Alongside Blackmore and vocalist Bonnet, the band features keyboardist Don Airey, bassist Roger Glover, and the late great drummer Cozy Powell. What’s peculiar about this release is that it’s marketed as a DVD and BluRay release that includes a companion audio CD. The audio features the complete concert recording; while the DVD features the following: an intro that features the main lick of the Purple classic “Lazy”, “All Night Long”, “Catch The Rainbow” (which Bonnet should have never tried to tackle!), the lackluster “Eye Of The World”, a pretty killer Blackmore guitar solo (for it’s time), “Difficult To Cure,” “Will You Love Me Tomorrow”, and the stellar “Long Live Rock ‘N’ Roll.” If you’re watching closely, you will notice some not so great editing as the sequence of the songs are out of order as Bonnet is with jacket off at the start, jacket on midway and then jacket off once again.

Monsters Of Rock Live At Donington 1980 probably isn’t a great place to start for the Blackmore and the Rainbow novices or beginners. Bonnet is a good singer but his ‘Wall Street’ meets ‘Miami Vice’ look didn’t fit Rainbow, Schenker or Alcatrazz for that matter. His stage presence was and still is a bit lifeless and dull. The saving grace here is that there is a complete audio of the show included in the package. However, beware as this is the ‘transition’ between Ronnie James Dio to Joe Lynn Turner and it’s evident.

In closing, it’s fascinating to watch this footage with Bonnet — who no matter who he sings for — seems to get lost in the shuffle. His performances on “Since You’ve Been Gone” and “All Night Long” are pretty damn impressive. When it’s all said and done however, Monsters Of Rock Live At Donington 1980 is for diehards Rainbow and Graham Bonnet fans.