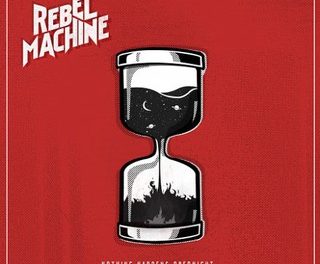 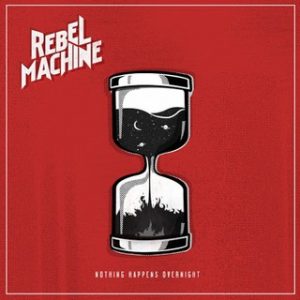 Rebel Machine are an indie band out of Port Algere, Brazil.  The album, featuring eight songs in 33 minutes, is entirely self-produced by the band, and has something to offer the modern metalhead. Nothing Happens Overnight is the band’s first full length release, and is aptly named. Rebel Machine have slowly gained a following throughout Brazil and are now looking at Europe and North America for further exposure.

I’ll be honest, it took me a few listens to get into this band. Rebel Machine were generous enough to send Sleaze Roxx a copy of their album and biography, so I thought I’d give it a shot. What I came away with is a good album experience. Not particularly stellar, but something worth checking out.

As with any small or independent recording, the first thing that strikes me is the quality of the production. In the case of Rebel Machine, I will give it high marks for clarity and definition… I can hear each instrument and vocal distinctly, which obviously adds to the listening experience.

Nothing Happens Overnight floats between late ’90s rock and a simpler, pure rock sound. “It Doesn’t Matter To Me” is a perfect example of what it was like to release a rock song in the early 2000s. There are elements of old school rock infused with that era’s influences. It reminds me of one of my favourite Canadian bands from that era, Staggered Crossing.

There isn’t much to differentiate Rebel Machine from other similar bands. Yes, it’s good rock and roll. “Goodbye Honey” and “Down the Road” are fairly generic. On this album, what is getting me off is the opening riff to “Waiting for You,” the grinding “Run Away,” and the cool chorus on “Nothing on Me.”  The first song, and first video release from Rebel Machine is “Don’t Tell Me I’m Wrong” which is the heaviest track on the album. It is a solid track with great vocals and a decent guitar line.

Ultimately, Rebel Machine have released an independent album full of potential. Many record companies should take notice of the potential in this band. As it stands, Nothing Happens Overnight is good listening for awhile, and worth checking out in the dog days of summer releases.