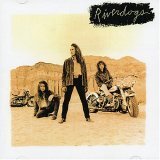 Review:
Sometime you discover a band, by plain coincidence, and instantly fall in love with their music. That wasn’t exactly the case with the Riverdogs‘ self-titled debut album, at least not for me.

Let’s get some things straight; this album is by no means a sleaze rock record. It doesn’t contain fiery, easy to digest choruses that will send you speeding down the freeway with fists pumping in the air. It sounds much more like an AOR CD without the cheese, but also without any catchy melodies.

It’s important to note that while the songwriting here shows no flare, the solos themselves kick ass. They were done by one Vivian Campbell of Def Leppard fame. In fact I discovered the Riverdogs while looking for solo records by Def Leppard members. This whole CD was recorded under Campbell‘s supervision as he was already a renowned musician back then, having worked with acts such as Dio and Whitesnake. Initially he was supposed to be just the producer, but after being awed by this band’s abilities he joined them full time. I personally don’t share his enthusiasm.

The main problem with the songs on this record is that they are too sappy, yet not sappy enough. They aren’t as emotional as a lot of AOR or power ballads that came out during 80’s. Sadly, Campbell‘s contribution, though it might have helped, is only limited to cutting guitar solos. And while the guitar work is really on fire, they don’t save this CD from drowning in a sea of mediocrity. These songs came out before Def Leppard got their hands on Campbell, and I must admit I completely understand their choice as his guitar work really shreds. However, no matter how hard I try to like these songs, I can’t force myself to even start liking them. They sound just a little bit too weak in my opinion.

Maybe if you’re into a rainier brand of AOR rock sound you might dig this CD. But if you’re looking for some sleaze or just solid good time rock ‘n roll music you might want to look somewhere else.