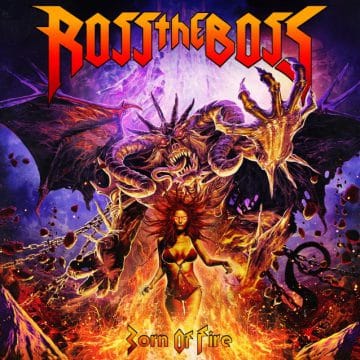 Review:
Ross the Boss is one of the few figures in music who is both legendary in the punk rock community and legendary in the metal community. The Dictators are considered by many to be one of the greatest early punk bands, and the readers of Sleaze Roxx likely agree that Ross‘ contributions to the first six Manowar albums cement his status as a metal icon. On his latest solo album, Born of Fire, Ross offers a mixture of his early punk style, his traditional Manowar-style metal, and elements of modern power metal to varying degrees of success.

The album starts off very promising with high-energy tracks that are reminiscent of the first two Iron Maiden albums in the way that punk and metal are seamlessly mixed into something that is distinct and fun. While early Maiden feels like a mixture of ’70s punk and ’70s metal, the opening tracks on this record feel like a mixture of ’80s metal and modern contemporary punk, which helps give the album a distinct feel from the get-go that is both fresh and appealing. Unfortunately, as the album progresses, it tends to fall into more standard power metal territory and does not remain as strong as the opening sequence. While not bad, the album loses a little bit of momentum and goes from something that feels fresh and dynamic to something that feels a little too comfortable and familiar.

Lyrically, the album definitely falls into the standard territory of epic fantasy to be expected of the former Manowar guitarist. There are a lot of songs that focus on a more sinister interpretation of Christian theology, which is actually something that makes the album more engaging and dynamic. The lyrics for the most part are lacking the cheese factor standard for the genre and are generally both well-executed and thought provoking. The vocal delivery on the album is consistently fluctuating between an aggressive punk style and operatic power-metal, often within the same line, which helps the distinct flavor of the record, especially on the more-straightforward tracks.

The guitar playing is, of course, exceptional throughout and once again proves that Ross continues to be one of the all-time greats. Born of Fire shines the brightest when it focuses on its unique uptempo blend of punk and metal. While the album may not maintain momentum throughout, it never falls below the category of “good”. Sadly it does not stay at the level of “excellent” throughout the entire record, as it does tend to fall into more generic sonics of the genre, which are thankfully saved by interesting lyrics. I do recommend giving this one a listen and deciding for yourself as this album does offer something distinct for the hard rock genre, and that alone is worthy of high praise