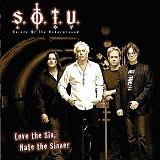 SAINTS OF THE UNDERGROUND
LOVE THE SIN, HATE THE SINNER
Released in 2008 (Warrior Records)

Production:
Produced by Bobby Blotzer, Keri Kelli and Jani Lane.
Mixed by Andy Johns and Saints Of The Underground.

Review:
For those who aren’t aware of just who Saints Of The Underground are, the band consists of Warrant frontman Jani Lane, Alice Cooper guitarist Keri Kelli, and Ratt‘s dynamic rhythm section of Robbie Crane on bass and Bobby Blotzer on drums. While most ‘supergroups’ fall short of delivering what you would expect from their collective talents, this debut album DOES NOT! Love The Sin, Hate The Sinner easily has my vote for 2008’s ‘Album Of The Year’! I just hope that when schedules permit that, the band will tour and record more Saints Of The Underground albums in the future! Time will tell…

The album kicks off with “Dead Man’s Shoes”, an up-tempo rocker showcasing Jani‘s killer vocal layering, a solid bass groove, a sweet albeit short solo from Keri, and Blotz‘ best drumming of the disc (with the exception of “Bruised”, but that’s a whole different animal that we will touch on later). Some people may remember this song from Blotzer‘s previous side project Twenty4Seven with John Corabi. While still faithful to the original, some lyrics and melodies were changed by Jani. “Tomorrow Never Comes” sounds vocally as if it could have been on Warrant‘s Dog Eat Dog with some tastefully aggressive vocals in the verses complimented by Keri‘s brilliant leads, this is by far my favorite track on this album.

“All In How You Wear It” just smells of attitude, from the lyrics to the playing. “Good Times” is another track from Blotzer‘s aforementioned Twenty4Seven project, complete with Jani‘s ‘Beatles-esque’ harmonies in the choruses and an effects-laden solo from Keri, I could easily picture this track on the radio. “Exit” really showcases the chemistry between Jani and Keri as songwriters and musicians, and judging from this CD and Jani Lane‘s solo album, the duo can craft some amazing hook-laden pop-rock tunes that should be all over radio (if it wasn’t for the fact that most Program Directors are deaf or just plain stupid). S.O.T.U. really take Tom Petty‘s “American Girl” and make it their own while remaining true to the original, Blotzer‘s hyper drumming really sets the pace for this track.

“Signs Of Life” starts of with some bludgeoning riffs and powerhouse drums. Yet another one of Jani‘s vocals that could have been on Dog Eat Dog or Belly To Belly, this track features a really bluesy solo. On “Bruised” the rhythm section really shines, laying down a galloping groove through the verses before the track kicks into high gear during the chorus. My second favorite cut on this album comes by way of S.O.T.U.‘s beautiful rendition of The Rolling Stones‘ “Moonlight Mile”. Starting off with some amazing acoustic work weaving together with the keyboards, this track slowly picks up tempo. Jani is at the top of his game vocally while the entire band is right there with him. This track is truly epic and the keys and orchestration really bring it to another level. Interestingly enough, Andy Johns, who mixed this album was also responsible for engineering the original version.

Love The Sin, Hate The Sinner ends with “Jimmy”, a track that fans of Warrant have been hearing since at least 1987, yet was never put on an album. It is a straight-ahead rocker featuring harmony laden vocals and my favorite solo of Keri‘s from this disc blended brilliantly with the solid groove from Crane and Blotzer.

There isn’t a dud in this batch of songs and everyone is at the top of their game vocally and musically. I just hope that S.O.T.U. gets together in a year or two and hammers out another album, the chemistry between Jani, Keri, Robbie and Bobby is all-to-evident!! This is what an album should be…all killer, no filler!!