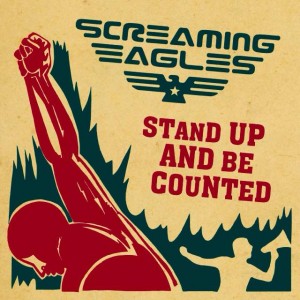 SCREAMING EAGLES
STAND UP AND BE COUNTED
Released on July 13, 2015 (Off Yer Rocka Recordings)

Review:
The positive — but also perhaps somewhat negative — feature of taking over the running of an established site such as Sleaze Roxx is that all of a sudden you get flooded with music to listen to. That is why it is so nice when you are able to put on a CD for the first time and know that you are going to like it — and perhaps even love — what the artist has to offer within a few seconds of the first track.

After listening to Stand Up And Be Counted, all I was thinking is who are these guys and how come I don’t know more about them? Upon checking YouTube, I realized that I had previously come across the band’s video “Rock N Roll Soul” from their debut record From The Flames. I also remembered reading my predecessor Skid’s review of that album and no need to say that Skid loved the band’s debut record. I can’t remember why I did not end up picking up the Screaming Eagles‘ first album because if the tracks are anything close to “Rock N Roll Soul” — and I understand that they are — that would be an amazing record! In addition, Stand Up And Be Counted is the type of album that is so good that not only will you want to snatch yourself a copy of that record but you’ll also want to obtain whatever else the Northern Ireland rockers have to offer.

Screaming Eagles remind me of a cross between well known Aussie rockers Airbourne and lesser known Canadian rockers Last Bullet (only when the latter plays hard rocking tunes on their Love.Lust.Illusion. album). Great yet simple guitar riffs from Adrian McAleenan, the raspy vocals of Chris Fry and the thunderous rhythm section of bassist Ryan Lilly and drummer Kyle Cruikshank combine to make one unbelievably good rock and roll album in Stand Up And Be Counted. The first few tracks are off the charts. I think its virtually impossible not to like “Ready For the Fall” and “Save Me” if you like rock and roll. Just about every track on Stand Up And Be Counted is a good one. I say that because I find that Screaming Eagles unfortunately take their foot off the pedal a little bit with the at times slower “Chase You Down” — which has an annoying guitar riff that is unfortunately the foundation for most of the verses — and the slower plodder “Streets Of Gold”.

If you like straight up no bullshit rock and roll, Screaming Eagles‘ Stand Up And Be Counted should be a no brainer record to add to your collection.