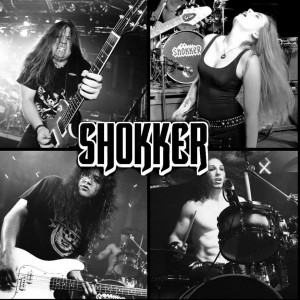 Review:
Whenever I think of “Shocker,” I instantly think of Steel Panther‘s song “The Shocker” from their debut album Feel The Steel. It is going to take some time for my mind to stop automatically associating that word with Steel Panther but Chicago based Shokker are doing a great job of getting me to that point with their self-titled debut EP.

Shokker play old school heavy metal reminiscent of the early ’80s but combine it with guitar shredding that is more synonymous with the late ’80s. It proves to be an interesting combination. Frankly, I think that if guitarist Casey Tremont toned down his guitar shredding a little bit, the songs would be even better overall. The guitar riffs upon which the three tracks are built upon are strong and the rhythm section on each track is quite good. I don’t mind and actually like hearing some guitar virtuosity and shredding when it comes to a song’s guitar solo — check out “Midnight Sun” where it is well done — but Tremont has a tendency to overdo it throughout the opening track “Adrenaline” and perhaps a tiny bit during the last track “Turn Around And Run.”

Aside from the slight occasional excess in guitar shredding, the three songs offered on Shokker‘s self-titled EP are really good straight up heavy metal. The best part of Shokker‘s self-titled EP is the voice of lead singer Rachl “Raxx” Quinn who simply can scream and sing with the best of them. I could listen to her voice all night long! In terms of picking and choosing which one is my favorite track out of the three songs, they are all quite good so it’s a tough task.  However, I will go with “Midnight Sun” because it is built upon a simple but strong guitar riff, Quinn‘s singing on it is amazing and Tremont‘s guitar shredding is held back until the guitar solo when he just lets it rip.

Given that there are only three songs on Shokker‘s self-titled debut EP, it simply leaves me wanting more. One thing I will note is that since Quinn seems to have such a great voice, it would be really cool to hear her sing a strong heavy metal ballad type track. Anyways, I am really looking forward to hearing more of Shokker in the future.