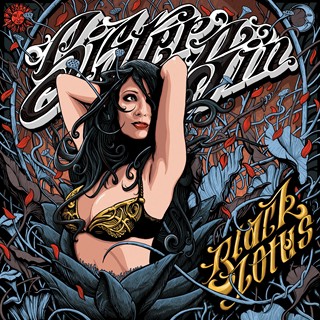 Review:
Sister Sin have emerged as one of the most consistent bands of the last decade — and what they are consistent at is simply putting out one great record after another. The band’s fifth full-length album, Black Lotus, continues the tradition of in-your-face angry metal which was especially forged with the Swedish group’s three preceding records — Switchblade Serenades, True Sound Of The Underground and Now And Forever. What sets Sister Sin apart from other bands are the always intense and powerful vocals of Liv Jagrell, whom I consider to have the best female metal voice out there.

Given how consistently great Sister Sin have been, and after hearing the first single “Chaos Royale” (which is nothing short of sensational), the main question in my mind was not whether Black Lotus would be good but rather would it be their best record ever? And that is Sister Sin‘s curse — because they have already released three absolutely stellar albums it is going to be very tough to top what they have already done.

Black Lotus starts off with “Food For Worms”, which has a nice build up before the guitar kicks in and Jagrell‘s familiar singing and screaming welcomes you to what I would consider a traditional heavy Sister Sin tune that could have been found on the band’s preceding two releases. What makes this song stand out is the blistering guitar solo from Jimmy Hiltula and the drumming from Dave Sundberg, which comes close to a thrash level pace and sound. Next up is the album’s best track, “Chaos Royale” — a masterpiece which will surely be in the band’s live set for many years to come. The song lyrics translate into an angry metal anthem with words such as, “I’ll put an end to all music that sucks” and “now the whole world is my personal bitch.” From the first note to the last, “Chaos Royale” may well be the ultimate Sister Sin song.

Had Sister Sin continued in the same vein as the two openers there is no doubt that Black Lotus would have been one stellar release, but the band would not really have progressed. Instead, Sister Sin are not afraid to branch out a little bit this time around and take some unexpected risks. “Au Revoir” takes the pedal off the metal slightly and starts a shift towards more melodies, including “catchier” verses and choruses during “Desert Queen”, “Count Me Out’ and “Stones Thrown”. “Count Me Out” sounds like it includes an orchestra in the background throughout that takes the forefront for a little while right before the guitar solo and is a prime example of Sister Sin taking some risks on Black Lotus — which pay off. While the song definitely has some nice melodies, the lyrics still have that angry rebel attitude with words such as, “Stay the fuck away from me.” “The Jinx” is the one big departure for Sister Sin as it is essentially an acoustic ballad. This is actually what I was hoping to hear from Sister Sin this time around, keeping the trademark in-your-face heavy metal assault but mixing it up with a few different tempos — “The Jinx” does just this while setting the stage for more diversity on future releases. Black Lotus ends with two faster tracks, “Ruled By None” and “Sail North”, that continue in the more melodic vein but do not reach the intensity and speed of the two opening songs.

Is Black Lotus the best record Sister Sin has ever released? I would say no, but it certainly is the most diverse album the band has delivered. I still count True Sound Of The Underground as Sister Sin‘s pinnacle, but I do note that over the last two years Now And Forever has bridged the gap that once existed between the two albums in my mind. I think with time Black Lotus will also come close, or even equal, the greatness of the preceding three albums. Whether Black Lotus is Sister Sin‘s greatest record is irrelevant because one thing is certain, it is one of the best albums of the year and the Swedish foursome have delivered the metal goods once again!