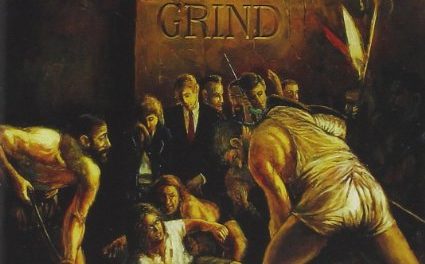 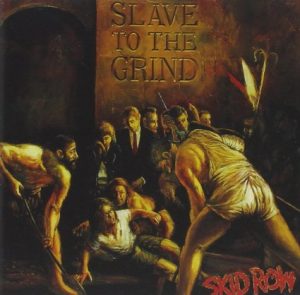 Review:
Crazy how time flies as Slave To The Grind is 25 years old!

You know — from August 1989 to June 1992, I saw Skid Row live five times! Four as an opener and once as a headliner when they actually showed up to Thunder Bay, Ontario back in June of ’92!

Skid Row‘s self-titled debut of course was “pretty good” (it recently finished tied for fourth on the Top 12 Albums that have stayed with Sleaze Roxx readers survey)  with the singles “18 And Life” (dug the video with those two fellas in it and one of them going to the slammer. “Your crime is time!”), “I Remember You” and some silly cheese like “Big Guns” and “Rattlesnake Shake.” They got on a huge arena tour in 1989 (opening for Bon Jovi) and of course, it took off from there.

It’s now June of 1991 and Sebastian Bach, Dave Sabo, Rob Affuso, Rachel Bolan and Scotti Hill release what I would  still call today a classic! There is no early nineties cheese whiz slices on here. What it does have is a heavy dark undertone, heavy songs — not all fast but heavy with some heavy riffs — stellar production from Michael Wagener (bass sound on here is awesome) good all around vocals. It’s all here kids sooooooo….

“Monkey Business” — Some neat guitar picking by Hill and Sabo start off the album and before you know it, Baz hollers and drums and bass join in. Man, the sonics are reaaaaal good! The bass here is mixed just awesome! It’s evident when you compare track one from Skid Row‘s debut in 1989 (see “Big Guns”) and track one from Slave To The Grind (“Monkey Business”) that gone is the cheese whiz fruit ball lyrics and in its place is a leaner meaner Skid Row that is not messing around! The solos and drums are heavy… Great start…

“Slave To The Grind” — So we go from heavier to real heavy and man this song cooks! Affuso on his drums double bass this track like a runaway train and man the lyrics are good. The solos are ripping fast and Baz is hammering down some real vocal chops!

“The Threat” — Drums, guitar and bass are dumped in the Skid Row music blender and out pops “The Threat!” This song has a great real slick verse, a cool chorus and the bass is just jacked on this! I’m really surprised more of these bands back then didn’t try to high jack Bolan‘s bass sound on this record! Twenty five friggin’ years later and it still sounds good!

“Quicksand Jesus” — Cool title and pretty good moody slow kinda heavy groove and this song has the big power chorus but no sirreeee! This ain’t no Poison mush. This is Skid “Frigging” Row. Sabo and Hill are two young guns and these two cats have the metal chops down. When they have to, they can put the breaks on the speed riffing and chill out some huge bombastic rock! Baz nails the vocals and well he does that all over this record! Jesus would be proud!

“Psycho Love” — Affuso locks his drums with Bolan‘s bass and boom — this song is off the hook. It’s crazy good and it goes cuckoo when the two guitars join! The cymbals are smashing loud during the chorus and it’s about the only thing that is louder than Baz‘s voice (kinda). Also, I love a bit of feedback towards the end and that makes me believe that the Marshalls are cranked in the studio!

“Beggars Day” — Ha… sometimes don’t always expect the expected here at Sleaze Roxx! You want to know my deal with “Get The Fuck Out?” Nah, not today as its “Beggars Day!” This tune reminds me of a later day Aerosmith rocker. The chorus is pretty damn good. I mean, they kinda go with the big gang backing vocals but still though a real good track — one worth checking out.

“Living On A Chain Gang” — Baz and the band smash some heavy action off the hop and boom, Baz is hollering and you know what? We are all “Living On The Chain Gang”… The lyrics in this say it all. I think these lyrics sum up a Monday to Friday work week — “Busted on a rock pile /Dusted in the heat/Shackled to the system/And draggin my feet….”

“Creepshow” — Big drums and big riffs start this groovy like metal shuffle of a tune. Hey, the lyrics are kinda Gene Simmons big dumbo arena rockish stylings but you know what? I will cut the Skid Row fellas some slack! The music I dig, the lyrics not so much but hey… I saw your baby at the “Creepshow!” Ok. sometimes goofy funny stuff ends up being funny shit!

“In A Darkened Room” — Kinda moodish piece of slower paced metal! The Skids aren’t Soft Row here. Ummm. No way! Quite the contrary amigo! I don’t care who the hell you are. You can’t go 120 mph all the time. Just don’t pull a Journey like power junk ballad on me! Sabo and company don’t care. They just do what they do!  This tune has a great solo in it!

“Riot Act” — Super duper riffing guitar, off the rocker drumming and a singer going bloody mental and this is Skid Row trying to derail the train off the tracks! This song rocks. The lyrics are genius! The guitar metal solo is genius! Baz sings good and doesn’t do any goofy falsetto and kicks it in the ass! Still remember them playing this in Thunder Bay and I betcha they shaved off a full minute off of this track playing it live! Speed man… and not by playing it quick but the stuff that makes you play it quick!

“Mudkicker” — Ok, I will say it this is one of Skid Row‘s best tunes! An end of album slow sludgey sabbathey kind of grind that just rules! The song starts off slow heavy and Baz rips down the vocals. The bass is friggin’ cool heavy along with Affuso‘s drums. Man, oh man, a bonafide classic! I just dig this song! I love the lyrics in this tune and man, does it not tell the truth about everyday living.  “Mudkicker” — Kick… Kickin’ me down… Mudkicker kick… Kickin’ me all around…

“Wasted Time” — The Skids end this heavy record with a heavy umm ballad kinda thingy! It’s ok man. I can handle this as they put it at the end and fair enough. The solos in this song are good. This thing rocks in a different kind of way!

In conclusion, Skid Row‘s 1991 Slave To The Grind in my mind basically took bands like Poison, Trixter, BulletBoys and gave them a swift hard kick in the ass into the cheapie bins in my books! It’s amazing that Skid Row grew by leaps and bounds from the debut in just over two years! Gone was the sterile production of the debut. Gone was “Big Guns” and those fruity kind of metal tunes. In its place was Slave To The Grind with heavy songs and playing, production, artwork — everything. Hell, even the lyrics are classic. I mean how can you not dig the use of the word “sapsucker”in “Mudkicker?” Exactly!