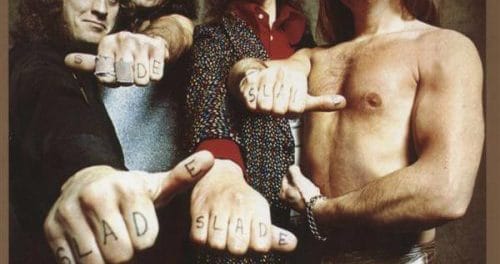 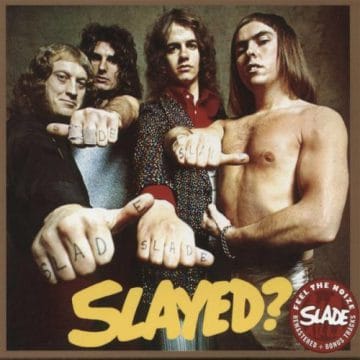 Released on November 1st, Slayed? would turn out to be Slade’s most popular album of the ’70s spawning two top ten UK singles on its way to reaching the top spot in the UK and landing on the US charts for an astonishing six months. “Mama Weer All Crazee Now”, released the previous August, would reach number two on the UK charts just short of number one follow up single “Gudbuy T’ Jane.” Ironically, despite claiming a dislike for having to record “Cum On Feel The Noize”, Quiet Riot once again covered Slade in 1984 with their rendition of “Mama Weer All Crazee Now” helping the album Condition Critical reach over three million in sales.

After revisiting Slayed?, an album I loved in the ’70s well after its release, it is no surprise to me that Slade was able to return to the spotlight in 1984 during the height of ’80s hair metal. Released in the middle of ’70s UK glam boom when bands like The Sweet, Mott The Hoople, T. Rex, Gary Glitter, and more ruled the UK charts, Slade’s music was tailor made for the arena anthem era to come influencing not only ’80s hair bands but also the one American band that influenced more ’80s bands than just about anyone else –- KISS. Sandwiched between hit albums Slade Alive! (a few years before KISS’ own Alive!) and best of compilation Sladest, the album Slayed? is a vinyl blast of what Record Mirror called “stomping, insistent, and bawled out stuff.” “How d’You Ride” could have easily been another hit for Quiet Riot and “The Whole World’s Goin’ Crazee” was foot stomping cock rock years before bands like Foghat and Grand Funk Railroad came along. “Look at Last Nite” even gets an early leg up on other UK glitter stars such as Queen and The Sweet with a blast of camped up, tramped up early rock and roll and before it’s all over, Slade toss out nods to ’60s rockers like The Who (“I Won’t Let It ‘Appen Agen”) and Janis Joplin, with a faithful rendition of her classic “Move Over.”

While Slayed? does include a couple of covers, it is pretty much a Slade album with the majority of the tunes co-written by guitarist / vocalist Noddy Holder and bassist Jim Lea and thankfully for fans of ’70s glam and glitter rock, released at a time when most band-written rock albums were nearly complete from start to finish. While most of the eras UK glam artists existed on chart singles (kinda following the formula of late ’60s American bubblegum music), bands like Slade moved to write their own quality music and managed to create albums filled with choice sing-a-long anthems that while filled with slightly more substance than many of the period’s one-hit wonders, also managed not to be overly pretentious like more serious era glam artists. Perhaps this is why Slade’s music turned out to be a fitting inspiration for the teens in the ’70s who would go on to become the stars of the ’80s hair metal explosion. Certainly Slade was at least a minor influence on bands in California that would use wild shows and anthems to pack venues on the sunset strip starting in the mid-70s.

And of course it has been documented that Slade was an influence on KISS… at least on Paul Stanley. How else do you explain the misspelling of the song “Rock and Roll All Nite?” This of course explains why in the mid-70s, an American kid such as myself latched on to albums like The Sweet’s Desolation Boulevard, T.Rex classic “Electric Warrior” and of course, Slayed? The songs are fun and uplifting and a great escape from the doldrums of school, work, and just life in general. As a kid it was a way to escape into my own fantasy world where rock and roll was king. As an adult it is reminder that everyday doesn’t have to be a downer.

Sometimes you can just toss on a record and get… Slayed? Oh yeah! You can!