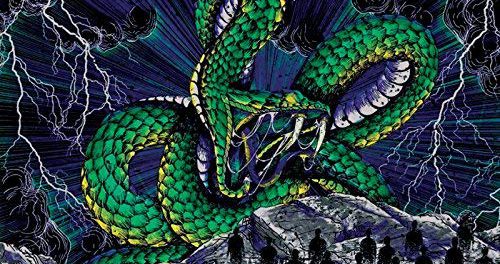 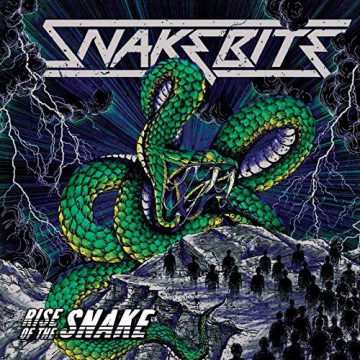 SNAKEBITE
RISE OF THE SNAKE
Released on May 4, 2018 (Maniac Attack Records)

Review:
Snakebite are back with their brand of sleaze rock / melodic rock. After Snakebite‘s fantastic debut full-length album Princess Of Pain, which reached #4 on the Sleaze Roxx’s Top Ten Albums of 2015, I was really looking forward to hearing their follow up record and seeing if they could top themselves. Snakebite released three videos in advance of the release of Rise Of The Snake so I had a pretty good idea what to expect even before the album came out. Truth be told, I wasn’t crazy about the first single “Two Desperate Hearts” because although it is a good song, it seemed a bit too melodic for my sleaze rock musical taste. The next single “Run Fast” was reassuring as the group adopted a heavier sound, particularly with the guitar work which was definitely sped up. The third single “Beyond The Rust” covered different ground again as Snakebite offered a ballad, not the sappy kind but a more metal type of ballad. Never having been the biggest ballad fan, “Beyond The Rust” was a decent song but like “Two Desperate Hearts”, fell a bit short for me.

The one constant with all the songs is the singing from lead vocalist Dominik Wagner. May it be a melodic rocker like “Two Desperate Hearts”, a speedy scorcher like “Run Fast” or a metal like ballad like “Beyond The Rust”, Wagner‘s voice remains that constant and one identifiable trademark to any Snakebite song. Just like on Princess Of Pain, I continue to simply love Wagner‘s Eastern European laced English singing. One thing that I remembered about Snakebite‘s previous effort Princess Of Pain is that my favorite songs were not the singles released from the record but the ones that were seemingly buried on the album. This is indeed the case with Rise Of The Snake with many of my favorites on the record having yet to be released as a single. “Heroes Of The Unknown” is probably my favourite song off Rise Of The Snake. It has a great melodic chorus, some nice vocal harmonies, a great guitar riff on which the song is based on and I love the guitar solo on that track. I am not sure if it’s Wagner or new guitarist Chris VanClough executing the guitar solos but unlike most bands that shock and awe with how many guitar notes that the lead guitarist can cram in a solo, Snakebite have almost gone the opposite route where you can appreciate every single guitar note because everything is played at an almost slower speed than you’d normally expect for a guitar solo.

Other fantastic tracks on Rise Of The Snake are “Aiming High” which is melodic rock with an edge at its finest, the aforementioned and heavier “Run Fast”, the second heaviest track and war feeling tune “Fields Of Glory” which also sees Rod Usher providing some guest vocals and “Devil On The Loose” which has Wagner almost narrating a story while singing. The funny part about Rise Of The Snake is that although Snakebite have gotten slightly more melodic with this album than its predecessor, which I consider to be a slight negative, everytime I put the album on, I want to listen to it from start to finish and there’s never a song that I want to skip except perhaps the last track “Light My Way” which isn’t bad but not great either until the killer guitar solo towards the end. In any case, one ballad would have been enough. Tracks like “Two Desperate Hearts” and “Beyond The Rust” may not have immediately hit a chord for me when the video for each track was first released but listening to those songs on Rise Of The Snake along with the other tracks makes me appreciate them way more. This is truly a case where the sum is greater than its parts.

Snakebite have done it again mastering the art of melodic rock with an edge. I lump the band in the same breath as such melodic rock (with an edge) heavyweights as Eclipse, H.E.A.T (especially with Tearing Down The Walls) and Kissin’ Dynamite (the latter based mostly on their latest album Ecstasy). I’d love to be able to catch a live show from these guys and hope that Rise Of The Snake is the album that catapults Snakebite to the next level such as an Eclipse or a H.E.A.T.

First single of the second full length album “Rise of the Snake” by SNAKEBITE (German Hard Rock act). Visit us at: www.snakebite-music.de www.facebook.com/SnakebiteTheBand