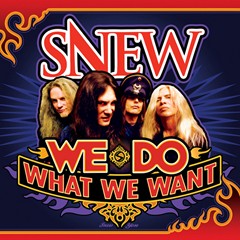 Review:
Snew are back, and very little has changed since their debut album Snew You. There is nothing wrong with that though, because this Hollywood band’s debut CD was a scorcher and We Do What We Want follows right where it left off. Once again Snew deliver rowdy southern tinged sleaze metal, the type of music that goes perfectly with a drinking binge and the early morning hangover.

We Do What We Want is filled with energy, attitude and all-guns blazing music. The Jackyl comparisons are still unavoidable, simply because singer Curtis Don Vito sounds so much like Jesse James Dupree — screaming with reckless abandon every time he bellows into the microphone, and the entire band shares that same intensity. Snew simply lower their heads, adjust the volume to ‘Earth shattering’, and drive attitude-driven hard rock right up your ass. It is a simple formula — one that delivers time and time again — and one that doesn’t let the listener down on the appropriately titled We Do What We Want.

Straight out of the gate with the AC/DC inspired title track Snew hit their stride with a heavy beat as Don Vito slurs each line. It just keeps getting better too as “Feedback And Distortion” may in fact be the band’s shining moment. Everything falls into place on this scorcher as the music presented lives up to the song title’s billing. Snew then spits venom with “Get Loud”, a song that seems ready to blow apart at the seams at every turn, but keeps it all together by the thinnest of threads. Rounding out this 10 song kick to the guts is the mellow yet abrasive “Who The Hell Are You” and “Shinebox”, a hard-rocking closer with a simple but addictive chorus.

With equal doses of AC/DC, Jackyl and Dangerous Toys, Snew have delivered another sonic assault to the senses. I’m not going to lie… Snew isn’t for everyone. They are loud, abrasive and rough around the edges — everything a killer rock band should possess — but it doesn’t always make for the most accessible music. The ‘Snew World Order’ is upon us, either jump on the bandwagon or get trampled to death!