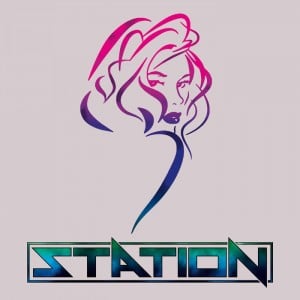 Review by Terry Martinson:
Station — oh dear lord battle frickin’ station! Yes, for you playing along at home and of age, I deliberately dropped the “s” from the tail of battle stations. However, I did not drop the “s”entiment — the nostalgic looking back at the best times of our lives when the biggest worries in our addled rock n roll brains were gathering a fistful of dollars to acquire a 30 pack of Stroh’s and deciding amongst the bevy of beauties who would share it with you. And of course all the while emulating the most excellent Bill S. Preston Esquire and Ted “Theodore Logan from the all too epic sequel about a Bogus Journey. But I digress…

Station as we already know are just damn good. They know it and they are crushing it! This follow up to the amazing EP Wired is anything but bogus. If you were one of the few lucky ones to nab the EP, consider yourselves blessed! Here the band has taken that ever so perfectly polished four song EP, pulled three of the four gems off (“I Don’t Want to Know Your Name”, “Everything” and “True Believer” all of which are, as we already know, stupendous songs), knocked some of the polish off and re-recorded them for the full length. Then these hit making prodigies added 12 more instant Station classics — that’s right, classics.

On this journey into the fray of all things 80’s AOR/hard rock, we can’t help but wonder what these brilliant young men from the big apple are inspired by. Why did they get up one fine day and decide it is arena rock for me? When I spin their new self titled disc, I am (1) grateful for their choice and (2) I can easily see whom they pay homage to as to me, they are wearing their influences on their chests in the form of Winger, Tesla, Skid Row and Trixter to name a few — and those old concert shirts fit great and look good too.

The video and single “Are You Sleeping Alone” is a dinger of a rock n roll ditty with some very clever lyrical content and of course is a very solid ball of rock. Patrick Kearney‘s voice is at its best, so smooth, rhythmic and so very pro. This is the kind of tune we’d expect from our heroes of the past in the genre to churn out. A caliber of songwriting that is many years Station‘s senior which is I’m assuming a great indicator of what we will see in the future. Fortunately for the listener, Station is relentless on the 15 tracks on this self titled release. Absolutely ZERO filler here and they definitely have given us our monies worth with the Slave To The Grind era Skid Row fueled “Dressed To Kill”, the arena rock balladry of “With Me Tonight”, “Waiting For You” and “I Can’t Live Without You” (think Skid Row‘s “I Remember You”) and to the extremely swanky, Winger/BulletBoys influenced “More Than Enough” and so on and so on and so on.

As you can plainly see, I can’t praise or rain down accolades on Station enough. As a band, they are in my humble opinion at the top of their game. As mentioned, Kearney‘s voice is amazing and perfect for this style of music. Clean enough to keep the ladies beating down the back stage door and with plenty of power and swagger for their boyfriends to get into. Chris Lane is a great guitarist that has a knack for creating the catchiest rhythm riffs and his chops are top shelf too. The bottom end is held down aptly and brilliantly by bassist Mike Anderson and the introduction of newcomer on the drums Justin Ryan Gaynor-Adelman.

I triple dog dare you to listen to any Station song on the new disc, better yet to put the disc on random and never tire of it. To toe tap, air guitar and nod your aqua netted coif to the succulent sounds that emanate from your stereo. The gauntlet has been thrown kiddies. For me, it is as simple as Kearney belts out in “Dressed To Kill” and this sums up my sentiments towards the new album and the way I fell when I spin it tenfold, “You’re Given Me Brand New Chills”.

Review by Olivier:
If every song on Station‘s full length self-titled record was as good as the first three songs, the album would be an easy contender for record of the year. Unfortunately and very similar to what happened when I saw Station‘s extended live set at the M3 Pre Party in Columbia, Maryland, I went from really enjoying the songs to losing interest and hoping that the band’s extended set would be over.


There is no question that the first three songs, “I Don’t Want To Know Your Name”, “Everything” and “Dressed To Kill” (the latter of which was the advance single released from the new record), on Station are awesome, catchy and could well help you reach melodic rock ecstacy. With the song “Everything”, Station show that Steel Panther is not the only band that can come up with great hooks and melodies. If you took out lead vocalist Patrick Kearney‘s singing from that song and added some sexually charged border line offensive lyrics, you might be hard pressed not to think that it wasn’t a Steel Panther song. Station‘s lead guitarist Chris Lane apparently wrote just about all the songs on Station and is probably the one person who could give Steel Panther‘s Satchel a run for his money in terms of excellent songwriting when it comes to hooks and melodies.

The problem on Station is that all momentum gained with the first three killer songs is shot with the lackluster ballad “Are You Sleeping Alone”. Kearney‘s vocals sound quite poor to my ears on that rather dull ballad. It becomes an uphill battle to regain the lost momentum and frankly, I find that the record never really recovers. The next track “True Believer” is actually quite good with a nice guitar riff / melody throughout the song and another catchy chorus. Just when things seem to pick up, here comes another ballad, this time “Without You”, which I must say is way better than “Are You Sleeping Alone” but Kearney‘s singing still grates on my nerves for that one.

The rest of the tracks on Station are solid for the most part but come nowhere close to the excitement and energy of the first three tracks. I have never been a big fan of ballads but if I had to pick one ballad to listen to on Station, I would go with “Waiting For You” which is buried as the tenth track on the record. Although the ballad lacks punch, I like it better than the other ballads on the album mostly because Kearney sings the song in a different key during the verses making it way more enjoyable. A couple of good tracks that can be found towards the end of the record are the groove oriented “Never Say Never” and the made to sing along “Wildest Dreams”.

As I have struggled to listen to Station in its entirety over and over again, it became obvious to me that there are just way too many songs on the record with fifteen in total and four of those being ballads. It is tough enough coming up with one or two killer stellar tracks, let alone an album worth, and I can’t think off hand of one artist that has ever come up with fifteen amazing tracks on one record. I think that Station‘s newest release would have been so much better if limited to the ten strongest tracks.

Reviewed by Terry Martinson and Olivier for Sleaze Roxx, July 2015