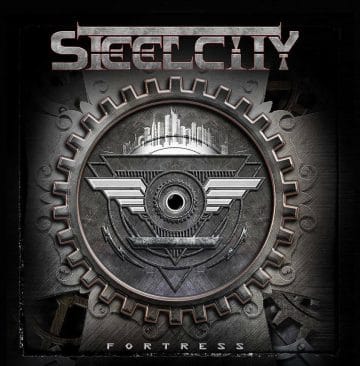 Review:
It’s always challenging for me to review a melodic rock record. You see, while I like melodic rock, I gravitate towards the sleazier, grittier, harder edge and/or no frills bands like L.A. Guns, Guns N’ Roses, Airbourne, The Lazys, etc. There are few melodic rock bands that I listen to on a regular basis with Eclipse and H.E.A.T (only really Tearing Down The Walls and Live In London) really being the only “melodic” groups receiving an enthusiastic regular rotation on my part. All other melodic rock groups tend to sound a little bland to me and depending on my mood, I might not even be able to get through an entire melodic rock record even if it’s really good. This is what has been plaguing SteelCity‘s debut album Fortress.

There is no question that SteelCity have delivered an excellent melodic rock record. The melodies are definitely there. The hooks are there. You have the powerful singing from Bryan Cole. There’s even some surprisingly really good guitar shredding from band founder and songwriter Mike Floros such as on “Too Little Too Late.” However, sometimes I listen to the entire album and really enjoy it (like right now for the purposes of this review) but sometimes (like yesterday morning), I can’t get through it as it sounds too bland, and I just have to put on a grittier record such as The Lazys‘ latest studio album Tropical Hazards. This pattern with SteelCity‘s debut album has been repeating itself over and over since I first listened to the record a few months ago. Sometimes, I really like it. Sometimes, I find it too bland and generic.

Putting on my melodic rock hat, the album’s songs are very well constructed, the background vocals are well executed, the melodies are there for easy sing alongs and there’s a real feel good vibe to the record. I think that you could give Cole just about any song and he would magically turn it into a melodic rock gem. The man has a great voice and I can understand why Floros decided to do an entire album with him rather than I believe his original idea of bringing in guest singers to do a solo album. Hell, I even like the faster paced ballad “Someone Like You” and that is largely due to Cole’s powerful voice. My favorite songs on Fortress are the harder edged “Passing Ships” which has a real U2 / Edge guitar feel to the verses and the cover of Vinnie Vincent‘s “Back On The Streets.” There is not one weak track on the album largely because Cole is such a good singer. He could probably rescue and make palatable any song that he was given to sing.

If you like melodic rock, SteelCity‘s debut album Fortress will likely hit the spot and be one of the better albums that you’ll hear this year. Again, given my tendency to gravitate towards the harder edged sleazier material, I sometimes really like Fortress and sometimes can’t get through it due to the lighter fare melodies. In any case, Fortress is definitely worth checking out and if you like melodic rock, odds are that you’ll love the album.