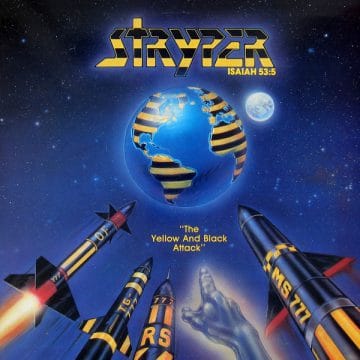 Review:
I first heard Stryper at my childhood church in Columbiana, Ohio as a part of a summer group of boys in my early teens. We would meet once a week and work on creating a sermon, which we had to present to the full congregation at the end of summer. After a hour of working on the project, we would have an activity to bond with each other, such as fishing at a private lake, or swimming at a church member’s pool. One guy in the group always brought in his cassettes to listen to, and the two names I remember was a heavy Christian punk group called One Bad Pig, and the other was the first Stryper cassette. 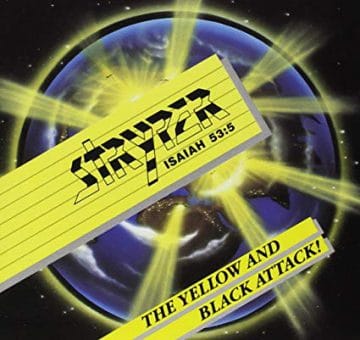 religious music I heard at this time were the hymns we sang at church, and the southern gospel songs of The Oak Ridge Boys), but I remember how shocked many of us were when we heard the music with Robert Sweet‘s powerful drumming and the high vocals of Michael Sweet for the first time. Bands like Petra never excited me in the Christian market (which was also played by the leaders) but Stryper… now we’re talking! Glam metal look with solid drumming, great guitars, and vocals? I am hooked.

Even before the band broke big with 1986’s To Hell With The Devil, my best friends listened to the band religiously (no pun intended) in our teen years, blaring the band’s first two releases as we piled into my friend’s gray Dodge Aspen station wagon on the way to church or cruising around town, along with Rush. Needless to say, the early backlash in the churches of Stryper being too heavy and “not Christian” because of their looks, was cast on us listeners too. I remember the shock on our youth leader’s face when they saw the cover of the follow up Soldiers Under Command with the band members standing in front of an attack vehicle holding guns, and the original To Hell With The Devil cover really sent them over the edge. Critics of the band state that the debut release, The Yellow And Black Attack, was too short, along with a lack of production value, which may be true to some extent, but it also gives the release its appeal.

This review is covering the re-issue release from 1986, with the two added tracks. The original debut from 1984 was an EP that sold limited copies. In 1986, when the band got a more popular fan base, the release was put out again with two extra songs to make it a full album. The opening song, “Loud ‘N’ Clear,” with the signature high pitch screaming by Michael, along with the powerful drumming of Robert, gives a strong start. The ending of the song has a mighty sound, much like the breaking of walls has occurred, bringing the Stryper force from the unknown to take over the old fashioned stereotypical views of religious music.

“From Wrong To Right” was the first song I ever heard by the band, when the guy in the boys group played it in the church’s boom box.This was something I never heard before. The drumming on this track is stunning and powerful, which I will state is something that gives this whole release one of its appeal. Michael‘s battle cry at the beginning, when the music kicks in, was chilling for a young teen hearing for the first time. The song is short and heavy, with no extra fillers, which I also enjoy.

As part of the re-release, a ballad from the band’s pre-Stryper days comes next, when the band was known as Roxx Regime. “My Love I”ll Always Show” is something that many church goers would hear today as part of their worship segment at church. The song vocally gets better as it continues, with it sounding a little too high at the beginning, but once the chorus and second verse arrives, the song has its best part. The production is better, which one can hear compared to the other songs. This is a nice added touch to the album. For me, it showed the band’s versatility; writing a nice ballad with a light sound as well as solid rocking songs. Of course, this was before “Honestly,” and before every band had a power ballad.

“You Know What To Do” starts off hard, but then goes into a more radio friendly style than on the other songs on the EP. The backing vocals are stronger here along with (again) Robert‘s drumming being the thing I enjoy most. The positive lyrics, also makes me feel good while listening. Christian rock was really something not embraced by the masses at this time (especially in the Christian market), and was new. The guitar work from Oz Fox is fun to hear on this song, not just on the solo, but the additional fills throughout.

The opening of the “Co’Mon Rock” guitar riff reminds me of Mötley Crüe‘s “Live Wire.” This song is a bad attempt in creating a rock anthem, with some cheesy lyrics. Yes, some could say that early Stryper lyrics are cheesy at times, but to me this one is one of the most obvious. Even though I am a Christian, I don’t think Christian music needs to sacrifice quality. Not all Christian music is good in my opinion. Lyrics like “We’re rockin for the rock” and “Co’mon rock, rock, rock.” are not as solid as some of the other lyrics on the other songs. The part of “rockin for the rock” is not meaning rock music, but a Bible reference to Jesus Christ as the rock, but still sounds lame. The music is good, but the words take it away from me on this song, but once again, with Stryper being one of the first major hard rock Christian acts, there was nothing to compare the lyrics to in regards to other acts, so even though the lyrics are not great listening to it now, it does get a little bit of a pass for being groundbreaking.

“You Won’t Be Lonely” starts off mellow, but then kicks in nicely. The appeal of this song is the different dynamics throughout the song. Starting soft, then hard, and back to a softer sound is enjoyable. The drumming here is different as well. Instead of the 4/4 straight beat that is relevant in most rock music, this has a different style. The guitar solo is a little less powerful than on other tracks, which takes away from the song due to the production, where the drums and rest of the music drown it out. Besides needing of a stronger guitar on the solo, this is one of my favorites on the record.

“Loving You” goes back to an up-tempo style. It stops at the end, as opposed to a fade out. The song is strong. It’s a song that gives a good solid ending for those that only had the EP, especially with Michael‘s yell towards the end. This was a song we used to play often in my friend’s car, thanks to the beat that was perfect being in a car. This is one of the songs from the band I go to when I want to hear great drumming. I love the guitars here.

Another song added to the re-issue is the Christmas themed song “Reason For The Season,” where the title is misleading. This is not a ballad with a bunch of orchestration or bells ringing throughout, like one may expect from a holiday record. This is a rock song with the signature duel guitars and powerful vocals that gave the band its style. The lyrics are different and stronger than some of the simple ones on the other songs, which shows the songwriting growth of the band. This was originally released as a single in 1985. The drumming on this is the more straight 4/4 mid tempo sound that would be on the more popular albums To Hell With The Devil and In God We Trust. It’s still a good ender to the re-issue.

I think sometimes Stryper fans bash this release due to its production value — and yes, I did do that above with the one guitar solo — but they forget that this was an EP recorded on a limited budget. With that said, I think that this release, along with the follow up Soldiers Under Command shows Robert Sweet‘s drumming as more than just being a timekeeper. His drumming here is underrated. This is a great debut release in a genre that was technically unheard of at the time, where Christian music was basically either hymns, southern gospel, or very light adult contemporary. Regardless of whatever tension the original members have had in the past few years, this is a release that still can be ranked a landmark debut in music. Not only does it bring back great memories for me as young kid, but I can still jam out to most of the songs on here. The appeal of being raw and not overproduced, along with a short run time, is what makes it a unique record.