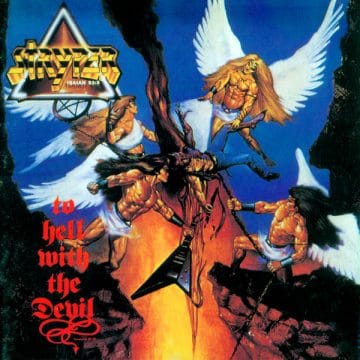 STRYPER
TO HELL WITH THE DEVIL
Released on October 24, 1986 (Enigma Records)

Review:
It’s hard not to remember that Stryper‘s breakthrough album To Hell With The Devil turns 30 years old this year with the Christian rockers having embarked on a 30th year anniversary tour to celebrate the release of the record. To Hell With The Devil is definitely an album worthy of celebration as one look at the tracks on the album show how much depth the album possesses.

Funny enough, back in the ’80s, I wasn’t that big of a Stryper fan. I first became aware of them when their video for “Soldiers Under Command” was released and soon enough, The Yellow And Black Attack and Soldiers Under Command were part of my discography. However, I didn’t purchase another Stryper album until about 2009 when I purchased 7 Weeks: Live 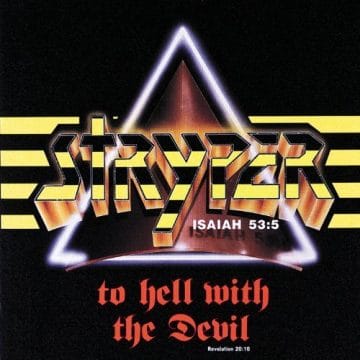 In America, 2003 and then went on to purchase all other subsequent albums that Stryper released. Accordingly, To Hell With The Devil is an album that I am hearing in its entirety for the first time for the purpose of this review. That being said, I was already familiar with many of the songs on the album back in the ’80s due to the band’s videos that played quite regularly on Much Music (Canada’s equivalent to MTV). As I listen to the record for the first time in its entirety, it is obvious that this is Stryper‘s signature album given that I am already completely familiar with seven of the ten songs since all of those have been regular staples in Stryper‘s live set for many years.

Frankly, To Hell With The Devil boasts some of Stryper‘s greatest tracks ever from their signature song “To Hell With The Devil”; to their two scorching rockers “The Way” and “More Than A Man” (two of my personal favourites from Stryper); to the easy to sing along to “Free,” “Calling On You” and the aptly named “Sing-Along Song”; to the hit ballad “Honestly.” As it turns out, there were only three songs for me to discover. “Holding On” sounds very ’80s and a bit dated but is still enjoyable. “Rockin The World” is an anthemic rocker that would have likely have received more recognition had it not been amid so many other great tracks on the album. The one anomaly on To Hell With The Devil is the hymn like, heavy on the keyboards, “All Of Me.” The song has more in common with hymns sung in churches during Sunday mass than to be included on a Stryper album. I don’t mind the song but it sure is an oddity and should have been left off of the Christian rockers’ signature album.

Overall, To Hell With The Devil is a very strong album that broke many boundaries for Stryper as a Christian heavy metal band. The fact that Stryper is able to tour and play the album in its entirety thirty years later speaks volumes to the quality of the songs on the album.

From: To Hell With the Devil

Stryper‘s “Calling On You” video:

Stryper – Calling On You

From: To Hell With The Devil

From: To hell with the devil Album