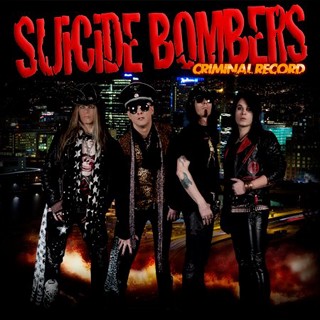 Review:
After one listen to the Suicide Bombers‘ new album Criminal Record you will want to take a deep breath and ask yourself ‘why I am only hearing this now?!’

It has been a while since I’ve heard an intro track and this one is complete with band introductions and initially put me into an over-the-top Steel Panther cheese mood. Quickly I changed my tune with the guitar and smut-filled track “Let’s Rock’N’Roll” — the opening lyrics promise a search for cigarettes and a party (not necessarily in that order) and made me excited to listen to the rest of the album. “Easy Access” is another great guitar heavy song with a sleazy message to the girls that ‘used to dance to the songs on the radio now you don’t know what to do’. The fourth track, “Napalm Heart”, takes a step back from the sleaze, sending a positive message to believe in yourself and your dreams, the mantra of just about every wannabe rocker and probably semi-autobiographical. I guess “Smoke and Mirrors” is what passes for a ballad with this band, but kudos to the fact that this is NOT a real ballad.

Criminal Record really picks up with “High On Explosives”, a gritty hard rock song that is heavy on the hooks and rebellion, promising a ‘one way ticket to the future and a standby ticket to hell’. The next two songs, “Electric Fire” and “Bombers En Vogue”, continue the heavy assault of good old fashioned rock and roll. “Teenage Breakdown” (partly because of the title, but also the arrangement) reminds me a little bit of The Who‘s “Teenage Wasteland” and would be an instant radio hit if rock music was still played on the radio. In my opinion “Cindy” treads on filler, but that may be because there is just so much music and many great songs on this record. Case in point, listening to the next song, “Princess Socialite”, I think I could actually taste the stale beer and cigarettes. Of course, if you’re going to have an intro you should have an outro as this album does, rightfully titled “Over & Motherfucking Out!” Criminal Record is truly a huge production from the Norwegian rockers.

Criminal Record has plenty of standout tunes and is real-deal dirty rock and roll. The voice of the self-proclaimed ‘Sleaze Fuhrer’ Chris Damien Doll is addictive and the production on the disc has a ‘tight’ feel to it. This album should come with a ‘warning’ that listening to this music may produce a natural high, incite a riot, and make you do things you wouldn’t normally do.