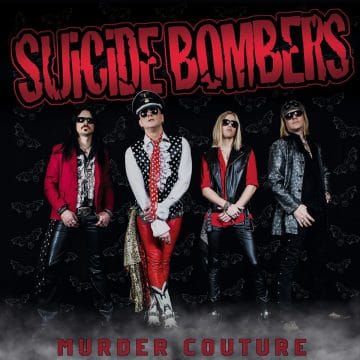 Review:
There are not many bands that keep improving from one album to the next, especially when they are on their fourth full-length studio album and started off pretty strong right off the bat with their debut record, but that’s exactly what is happening with the Suicide Bombers. From one album to the next, the Suicide Bombers make some incremental changes and keep improving, shoring up their weaknesses and building on their strengths.

Funny enough, I didn’t realize just how much I was into the Suicide Bombers‘ latest offering until burning the midnight oil at work one night. I had a deadline to meet and was working well into the early morning hours with my customary stack of CDs at my desk. The CD player never had to be changed that night because I kept replaying Murder Couture in its entirety for hours and hours on end while singing along loudly (I was the only one in the office at the time). You know how you listen to certain albums and they always remind you of a certain event? Murder Couture will likely always be etched in my mind for that fateful night when I was alone in a huge building singing along to some killer tracks while “killing it” at work to meet my deadline.

In terms of building on their strengths, once again the Suicide Bombers have come up with a killer album cover. It’s simple but the colours and the band members really pop out. In addition, once again, the Suicide Bombers have come up with a memorable and fun intro song. This time around, every band member is introduced in high fashion after the group is described in part as “the influencers of influencers, the designers of dreams, the sharpest dressed band the world has ever seen, Ludwig van Beethoven for the next generation.” Very witty indeed Messieurs les Suicide Bombers! You can have the best intro in the world but if the next song sucks, it’s all for naught but the Suicide Bombers were able to follow up their killer intro with a splendid and killer track in their rousing title track that will definitely have you singing the words “New York, London, Paris, Milan.”

While some of the greatest albums feel like the bands have thrown everything together in record time with warts and all, the Suicide Bombers‘ album Murder Couture feels like every detail including every note was meticulously dissected to ensure that you got the very best that the band could offer. The production is crystal clear, you can hang off every word emanated from “The Sleaze Fuhrer”, lead vocalist and architect of the band, Chris Damien Doll. Not only are the Suicide Bombers building on their strengths but they have also shored up some of their weaknesses (there were very few) from their last studio album Suicide Idols. This time around, the songs on Murder Couture feel like they are exactly at the perfect speed while on Suicide Idols, it felt that quite a few of the songs could have been sped up a little bit. In addition, while Suicide Idols had one unfortunate dud track (“Sex Star Icon”), that’s not the case for Murder Couture where every song is a good one. The album slows down a little bit with the slower “Worlds Without End” but it’s still a decent track.

With Murder Couture, it seems that the Suicide Bombers have put everything together, building on their strengths and shoring up their few weaknesses. Pick up Murder Couture! You won’t be disappointed!