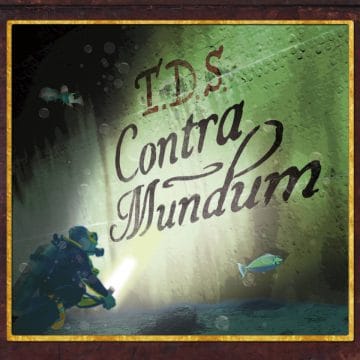 TALL DARK STRANGER
CONTRA MUNDUM
To be released on September 18, 2018 (Foot In The Door Records)

Review:
Six years is a long time between the release of a sophomore album relative to a debut. When Tall Dark Stranger released their 2012 debut album There It Is, the band offered a breath of fresh air to the music scene. The project, led by vocalist and multi-instrumentalist Dee Allen, released a refreshing AOR throwback album with a sound that was somewhere in-between King’s X, Peter Gabriel, Todd Rundgren and Journey. Slick keyboards, layered vocals, rocking guitars and strong pop hooks made the first Tall Dark Stranger album an instant classic of melodic rock.

While the first album was strictly a retro rock album recalling the heyday of ’80s glory, the new Tall Dark Stranger album is much more contemporary. While this is definitely the same band and same songwriter who brought us the great cuts from There It Is, on this album the band seems determined to prove they aren’t strictly a retro revival act and can be competitive with current artists. The band, based in Nashville, has incorporated slight elements of pop country into the sound of their second album. The result is grittier guitars and an album that feels much more organic and earthy as opposed to the icy chill of the first album.

That’s not to say that the chilling keyboards of their past record are gone completely, but they are nowhere near as present as on the first album, at least on all of the tracks. Production wise, this is a much more modern record, akin to the last few Mr. Big releases, but there are a few cuts with throwback sensibilities recalling everything from Hall & Oates to Van Halen.

If you’re a fan of the music of the ’80s, and more importantly, a fan of what ’80s artists are releasing as new material in 2018, then you’ll appreciate this album quite a bit. This falls right in line with the likes of Richie Kotzen’s recent solo work — soulful, tasteful, catchy and contemporary with some retro throwbacks. While slightly more mellow than the first album, there’s still plenty of rock to be had and fans of melodic rock would have an incomplete collection without this record.

Reviewed by Greg Troyan of Lipstick for Sleaze Roxx, September 2018