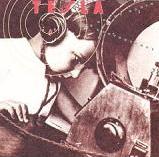 Review:
The second release from the Sacramento five-some known as Tesla was truly their masterpiece, and more generally, a very good record. Although Tesla were often skimmed as a “hair metal” combo, this is only half the truth and this record stands as evidence. In fact, their songs are something further from the same old verse-chorus-verse-chorus-bridge-solo-chorus scheme and the sex-drugs-rock ‘n’ roll cliche lyrics, but yet manage to keep gritty and tough, thanks in part to an all-around skilled musicianship and a blue-collar attitude, which was much in display.

“Hang Tough” opens up with one of the best bass parts ever and displays great guitar harmonies alongside, with Jeff Keith‘s gritty voice delivering an incredibly infectious melody and positive lyrics about hanging on. It may well be the album’s best cut. “Lady Luck” speeds things up a bit and rocks convincingly with great vocal harmonies in the chorus, while the slightly menacing “Heaven’s Trail (No Way Out)” retains a darker edge but still works out well. The slide guitar intro of “Be A Man” is a good showcase of the laid-back atmosphere this song creates and the incredible guitar solo gives the listener plenty to drool over, while the odd-sounding arpeggio that starts “Lazy Day, Crazy Nights” soon evolves into a peculiar song with a strange dreamy melody, hard to find in your average 80s hard rock band.

“Did It For The Money” is another standout track, a crunchy yet slightly sad intro turns into a furious hard-driven riff with aggressive vocals and a killer solo. The technically complex “Yesterdaze Gone” is a furiously rocking number with a very simple but effective solo. “Makin’ Magic” keeps the rocking level on the very edge and leaves space to the semi-ballad “The Way It Is”, an enjoyable tune. “Flight To Nowhere” holds up quite well, but in the end is probably the album’s weakest link, especially compared to what follows. The hit single “Love Song”, shows a complex acoustic intro, a touching vocal performance, kinda hippie lyrics about universal love (!) and a long guitar solo that can almost compete with “Sweet Child O’Mine”s. Had the intro been shorter (which it was in the video version) the song would have been really perfect. “Paradise” starts as a touching ballad and evolves into a rocker with a funky feel to it, the solo at the end smokes! “Party’s Over”, a good but a bit ‘samey’ cut, ends the album noisily.