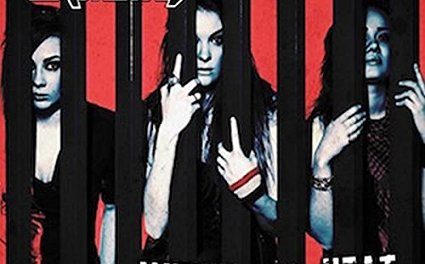 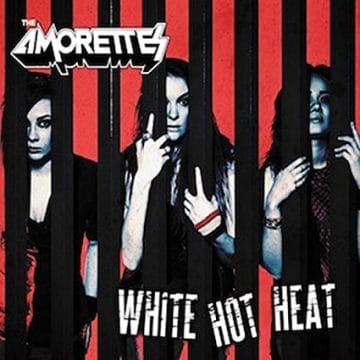 Review:
The Amorettes are back, and rather quickly this time. Following up March 2015’s Game On is White Hot Heat, and once again it’s damn good! Their aggressive brand of in-your-face, pulse-pounding rock is emblematic of ’80s post punk rock. On the other hand, White Hot Heat also has melodies that make The Amorettes‘ sound more accessible than many of their contemporaries.

These three young ladies should appeal to anyone who likes their hard rock with some tongue-in-cheek lyrics and song titles. White Hot Heat sports tracks titled “Man Meat,” “Come ‘N’ Get It” and “Pervert Alert” that add to the fun factor of their party songs.

And herein lies the charm of The Amorettes, because despite Gil Montgomery‘s admirable riffing, soloing and strong pipes backed up by the solid rhythm section of the McKay sisters, the real appeal of this band is that they are just three lasses having a laugh while providing a good time soundtrack. I doubt they think they’re destined for world domination but the thing about The Amorettes is that they tap into the root of where classic rock comes from and so what you really get is a purity that is engaging and unthreatening. In short, it’s difficult not to like them even if you can’t hand on heart say you love them.

This is not music for candlelight and wine, but rather for Jack Daniels and partying or driving and headbanging. If you are into hard rock and have yet to hear The Amorettes, then White Hot Heat will be a treat. This kind of rock is totally contagious, so just about every song will have you adding more volume and giving your speakers a workout.

THE AMORETTES – Let The Neighbours Call The Cops (OFFICIAL)

The Amorettes – Come ‘n’ Get It