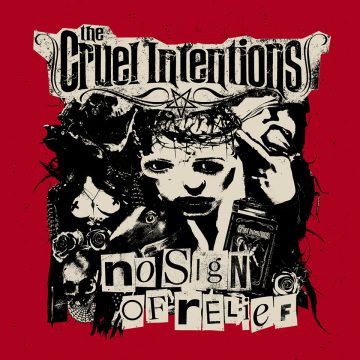 THE CRUEL INTENTIONS
NO SIGN OF RELIEF
Released on September 21, 2018 (Indie Recordings)

Review:
The year 2005 was an important one for the ‘sleaze rock’ genre as so much had transpired and changed around that time. The kings of sleaze Mötley Crüe had reunited and were a sudden sensation again selling out arenas around the globe. The grunge and nu-rock movements were dead and pop-punk was on its last gasp. It was acceptable again to admit you liked and listened to ’80s rock, which was ubiquitously despised after 1991.

2005 also saw BuckCherry reform and release the platinum selling 15. Back in Europe though, a quiet revolution of sleaze was beginning to form with a then-unknown Lizzy DeVine helping to form Vains of Jenna and release a debut EP in 2005 and a full-length album in 2006. Around this time, other bands were making headlines like Crashdïet and Dirty Penny from the USA. The sleaze rock genre was back on track and growing like wildfire.

Somewhere along this new sleaze rock path in 2010, Vains of Jenna had come to part ways with their lead vocalist Lizzy DeVine. It was sudden and Vains of Jenna went on a bizarre route to re-record their second album (which was arguably somewhat of a departure from their debut material) The Art of Telling Lies with a new singer. One of the new voices leading the sleaze movement had suddenly been silenced and nobody was quite sure why. Vains of Jenna went on to flounder, stumble and implode shortly thereafter.

During the next few years DeVine went back underground but rumblings of him starting a new project began to surface. Finally in 2015, a blistering new video and single was released by DeVine‘s new band The Cruel Intentions. He was back, and Vains of Jenna fans were delighted. In the years to follow, a string of video singles were released, which leads up to now with the full-length debut No Sign Of Relief.

In listening to No Sign of Relief, it completely takes me back to where Vains of Jenna seemingly left off on 2006’s Lit Up/Let Down. A total ‘wow’ factor is in order here as DeVine leads his new band back to what I can best describe as a modern sleaze-punk sound complete with a Sex Pistols riff on Genie’s Got A Problem as DeVine shouts “Genie’s gettin’ louder, pukin’ in the shower, A little bit of that, A little bit of this, Daddy’s little girl is a rock and roll bitch.” DeVine is back in a big way and his band The Cruel Intentions hailing from Oslo, Norway is set to take the sleaze rock genre to (hopefully) some new heights.

The album commences with “Jawbreaker” which is a fast hard-hitting track displaying strong gang vocals and DeVine‘s raspy-scream (which has not missed a single step) delivering ‘All I wanna do it rock and roll until I die.’ You get the picture. The track “Borderline Crazy” is pure infectious fun and could easily have been from early Vains of Jenna efforts. There is often an element of anger in No Sign Of Relief. It’s this anger where in my opinion the punk overtones exist but with a little bit of early Guns N’ Roses sprinkled on top. Song titles such as “Everybody Riot”, “Go Fuck Yourself” and “Chaos In A Bombshell”, I can’t help but think it would do Sid Vicious proud. These tracks are not sugar-coated pop metal but rather gritty gutter-rock bringing back an element of danger to the genre. Instead of being cute with smiles the band appears more rough and tumble — guys you wouldn’t want to mess with at the pool hall. You can also hear the modern production aspects, especially on some Slash-style riffs from lead guitarist Kristian Nygaard.

No Sign Of Relief is a tremendous contribution to the sleaze genre and I think I can safely say for the majority of Sleaze Roxx readers, that we’re ecstatic to have Lizzy DeVine back.

The Cruel Intentions‘ “Genie’s Got A Problem” video:

The Cruel Intentions – Genie’s Got a Problem (Official)