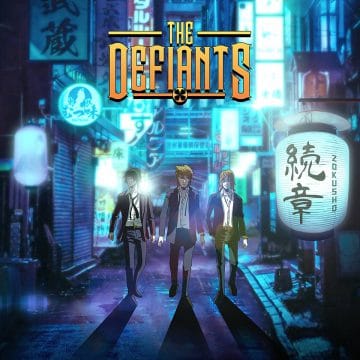 Review:
Paul Laine, Bruno Ravel, and Rob Marcello are back with some friends, cameos by other Danger Danger members mostly, for a new album. The last Defiants album, their first and self-titled, was a hit and miss release that I enjoyed enough to give a second album a chance. Sadly, a lot of the same problems that kept the first album from being a mainstay in my CD player are here on the second album titled Zokusho.

The first album came out during an interesting time in my life. My first real job, which I had held for nearly 10 years, was slipping away from me as the company looked for excuses to get rid of American workers and send those jobs to Jamaica. Plus, my mother-in-law was sick. So, it seemed like when it rained, it poured and the debut album was in my CD player whenever I got a few spare minutes to take my mind off the every day life stuff that was becoming too much to deal with. Thankfully, the second album found me at a point where I could dedicate more time to the music and not have very heavy, dark stuff on my mind. Sadly, there was no heavy, dark stuff on this album! I mean, I’d have settled for just heavy and light. But, instead, it is a collection of songs that mostly have the same overall message. That message? “Girl, I miss you. Girl, I want to get back together.” That works for some. I mean, if you think about it… Other than “Burning Like A Flame”, do Dokken have a single song about love gone right? No! But, that works for Dokken. It seems to miss the mark here.

It isn’t really like I don’t like pop music. I do. I especially like pop rock. When I’m not listening to Ozzy’s Boneyard or Hair Nation, I tend to travel through the ’50s through the ’90s stations on Sirius XM. I even like the softer hair metal bands like Bon Jovi and Def Leppard. Heck, the main reason I’m buying these albums is I’m a fan of Danger Danger and they’re not super heavy. But, I really like the songs. I just don’t think the connection was made to me with Zokusho. It falls flat. I think the most disappointing thing on the album is there are songs, like the first track “Love Is The Killer” that have a great guitar riff and backing “HEY” vocals that could produce some power. Then Paul Laine starts singing and the song just softens up. Paul‘s voice isn’t the problem. It just is a more calm song from that point and that isn’t really what I was hoping for.

The standout track is the one they put out as a single and, as far as I saw, the only one they put out as a single or a hyped video on YouTube which, in 2019, I presume is what we used to call a single? That is “U X’d My Heart” with X being “Crossed.” The song has a little power under its sails but, again, is not as powerful as “Love And Bullets” or “Take Me Back” from the debut album. It just… is. So, if the video for this song did it for you, the album might do it for you. But, for me, it didn’t. I think I’ve made that abundantly clear, have I not? The final song on the album might be the one I would go back to if I was to dust off the jewel case on the CD rack and stick this in down the road. “Drink Up” might have some country overtones but is a good time rocker the album would have benefitted from more of.

In closing, the album isn’t “bad”. It isn’t “good.” I just think I was looking for something a little more in line with Danger Danger or early Bon Jovi. I was looking for a mixture of songs ranging from pop metal to just pop. Instead, I got a few songs that worked and that I liked but an overall collection of songs that seems to mostly have the same message and, to some extent, blend together because the message is the same. But, again, if you dig the samples they put forth, pick up the album and judge for yourself! Maybe I was digging the Tom Keifer‘s Rise and Crashdïet‘s Rust albums that came out the same day too much to give this softer album a fair shake. But, having felt like this, though less so, after the first album, I think it is clear The Defiants have a slightly too pop leaning sound for me to win me over fully. That said, if they do a third album, I’d probably buy it too. So, what does that say about me?

The Defiants‘ “U X’d My Heart” video:

Subscribe here for more videos – http://radi.al/SubscribeFrontiers | From the album ZOKUSHO. Get your copy NOW: http://radi.al/Zokusho THE DEFIANTS are back with their sophomore album, “Zokusho”. Comprised of Paul Laine, Bruno Ravel, and Rob Marcello, The Defiants is three fabulous musicians who, as fans in the know will immediately recognize, all have ties to popular hard rockers, Danger Danger.