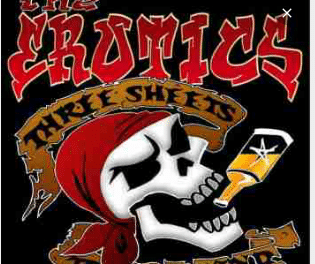 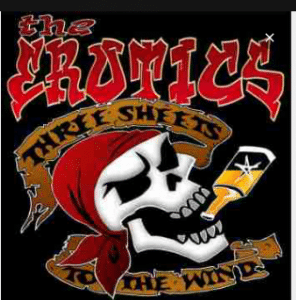 THE EROTICS
THREE SHEETS TO THE WIND
Released on October 30, 2015 (Trashed Planet BMI/Find Your Fangs Records)

It’s hard to believe that The Erotics have been at it since in or about 1996 because Three Sheets To The Wind sounds so raw, dirty and unfiltered, and closer to a group’s debut record before it cleans up and polishes its act over the years rather than a veteran band celebrating twenty years of existence that keeps cranking out sleazy dirty musical deliveries. Mixing the sleaze of early Faster Pussycat with punk edge of The Ramones, The Erotics do not reinvent the wheel with the three songs on their latest mini-album Three Sheets To The Wind but simply deliver a nasty sleaze dripping three songs that all rock from start to finish. Lead vocalist Mike Trash will never win a “singer of the year” award but his raspy and limited vocal delivery fits the songs like a glove. You got to hand it to the trio — who clearly don’t take themselves too seriously with names such as Mike Trash, Billy Beer and Johnny Riott — since they sound like a young hungry band rather than seasoned grizzly veterans and the only thing that betrays their age is Trash‘s voice which doesn’t sound like one coming from a 20 year old “kid.”

The title track to the Three Sheets To The Wind EP opens with a guitar riff that would make you think that The Erotics have more of a classic rock sound before the song kicks off and you definitely know that the rest of the track will be a dirty sleazy venture. I find that Trash sounds a lot like Grimm Jack‘s singer Billy Kohout with more of a punk edge. The next song “Last To Arrive, First To Die” reminds me of early Faster Pussycat with again more of a punk feel. The last track “Little Miss Miserable” lives and dies with Trash‘s vocals and is probably the weakest track of the three. I do really like how the song feels like it ends midway through before kicking back in again.

My only complaint for Three Sheets To The Wind is that there are only three songs! It seems like more of a tease than anything else with the three songs clocking at less than ten minutes altogether.