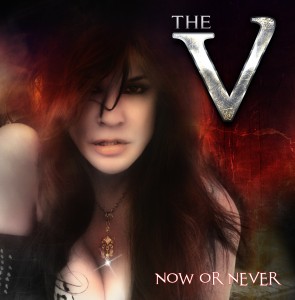 Review:
I have to admit that I love female fronted metal bands. One of my favorite bands over the past few years has been Halestorm. However, I was really disappointed with their most recent release, Into The Wild Life. I felt it was more modern pop sounding and not as heavy as what I have come to expect from them. If you feel the same way, I’ve got just the album for you.

Now Or Never is the first solo outing by Veronica “The V” Freeman, lead singer of the band Benedictum.  Having said that, that’s where the similarities end. This is a definite departure from the sound of Benedictum. Now Or Never is more on the melodic side, but still heavy at the same time. Now Or Never is exactly the album that I wanted Halestorm to release, but they didn’t. Lucky for us, The V knows what we want to hear and she brings it all to the table for this release.

So here’s a track by track breakdown. The first track “Again” hits you like a sexy slap in the face. I simply can’t get this track out of mind. It’s really that good. It’s followed up nicely by the title track “Now Or Never”, a straight ahead rocker. Next up, we have “Rollercoaster” an exciting track that makes you want to bang your head. She lightens the mood a little with “L.O.V.E.” an infectiously, catchy song that might have you unexpectedly, singing along. Next, is “Line In The Sand”, an upbeat song about standing your ground and holding up for your what you truly believe in at all costs.  With “Love Should Be To Blame,” Freeman brings a lot of emotion and feeling to this tale of heartbreak, while maintaining a certain amount of grittiness.

“Kiss My Lips” is a sexy rocker with a vocal duet with none other than Leather Leone from Chastain. Their vocals work very well together and make this track one of the standouts. “Spellbound” is a great driving song that shows her passion for the material. “Starshine” is the only popish track on this album. It’s not bad, for a sugary ballad, but I prefer the heavier tracks that showcase The V‘s rock sensibilities. Thankfully, the next track, “Below Zero” gets off in a more rocking direction. It reminds me at times of some of Vixen‘s more metal sounding material. “Ready To Run” sounds musically, like a lost Dio track with Freeman providing the vocals.  And for the finale, we have “King For A Day” another duet, this time with former Black Sabbath lead vocalist Tony Martin. This again, like the whole album, shows her versatility and ability to change things up with her sound.

I simply love this album from beginning to end. If this album had been released in the ’80s, I have no doubt we’d have been seeing The V on heavy MTV rotation. If she continues to put out albums that are this good, I’ll expect to see her name listed alongside the reigning metal queens like Lita Ford, Vixen and Doro. Take note Lzzy Hale; I still love you, but The V has proven that you’re not the only lady who knows how to rock it old school.