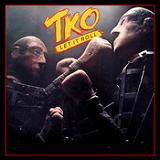 Review:
TKO were rocking Seattle long before grunge made the city popular. They may have influenced some of those grunge artists, but thankfully they didn’t sound like them. Although this album doesn’t contain TKO‘s best work, it does introduce a young band trying to find their place in the late 70s rock scene.

Let It Roll reminds me of early Riot material, in that both bands were on the brink of something special but just hadn’t quite put all the pieces together yet. In the case of TKO, at this point in their career they fell somewhere between The Who and a working-man’s Boston. The guitars hadn’t been cranked up yet, although vocalist Brad Sinsel (who later resurfaced in War Babies) already had his unique gravel throated delivery down pat.

There is no denying that this CD came from the seventies, it has that dated sound to it – think Whitford/St.Holmes. Keyboards played a larger role in Let It Roll than it did on the band’s follow-up releases, resulting in this sounding more like bar-band mainstream rock as opposed to the heavier brand of music they would later perform.

Upstart label Divebomb Records has reissued this long out-of-print (the original label actually went bankrupt by signing the Pope!!) and often bootlegged album with several live tracks from a 1978 KZOK-FM radio show. Renowned author Martin Popoff even writes the liner notes for this reissue, but to be honest I can only recommend this to people that want to hear TKO in their infancy – if you want good music get the reissue of In Your Face instead, which showcases the more metal version of TKO.