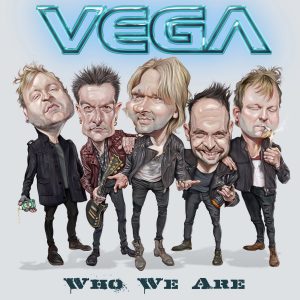 Review:
April was an interesting month for me as a Sleaze Roxx contributor. I was tasked with reviewing albums by bands that took me out of my comfort zone. Specifically, melodic hard rock bands from Europe — Drive She Said, Dynazty, Treat, etc.  I’m getting used to the inclusion of keyboards in the music mix. Still not a fan of keys, but Vega is another step in the right direction.

Anyway, I digress. Vega are five guys from the UK that have been together since 2009, having released three albums over that time. Who We Are is their latest effort.  Listing Bon Jovi, Def Leppard, Europe, and Winger as influences, singer Nick Workman says “We wear our love of ’80s rock music on our sleeve, but we also have injected our love of modern rock music to it. We aren’t trying to rehash anything: the sound we have achieved is 100% VEGA.” I’d buy that. Who We Are is a sing-along gem that would have been a radio hit in the ’80s. Today, at least in North America, the album is a little too pop-rock to fit into any on-air format. But, it doesn’t try to be anything except what it is, a good melodic/AOR record.

Starting off with a killer guitar, the first song “Explode” blasts off and lets you know immediately what direction this adventure will take. Tom Martin and Marcus Thurston can write some solid riffs. I suppose the keyboard softens the sound from “bang your head” to “bob along to the melody.” “Generation Now”, “Every Little Monster”, and “We Got It All” follow in that same vein. Some would call it the Goldilocks paradigm — not too hard, and not too soft. Whether it is just right is a question for the individual listener.

“Nothing Is Forever” is your requisite ballad. Pretty pianos and decent composition.“For Our Sins” is similar to the old Firehouse or the new such as The Darkness, with Nick Workman’s vocals drifting between falsetto choruses and catchy verses. However, no matter how many times I run these tracks, my ears prick up whenever “Saving Grace” comes on. It is an anthemic, total sing-along tune. One of those songs that hooks you in even as it soars. Every instrument has its place, and the harmonies sound great.

I was not surprised to learn that Who We Are was produced and mixed by Harry Hess from Canadian rock legends (in Canada at least) Harem Scarem. There is a clear similarity between Vega and Harem Scarem, in the songwriting and the way the instruments interact. If Who We Are is really a reflection of who these guys are, then based on the album cover art alone, the band is enjoying the exploring themselves.