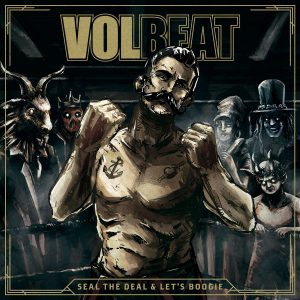 Review:
Volbeat have been around for a while, and have certainly scored big on the hard rock/metal scene. Formed in Copenhagen, Denmark, Wikipedia describes their albums thusly, “All of their studio albums have been certified gold in Denmark. Their second album ‘Rock the Rebel/Metal the Devil’ received platinum status, and their 2010 release ‘Beyond Hell/Above Heaven’ was subject to widespread international critical acclaim, receiving double platinum in Denmark, platinum in Finland and Germany, and gold in Sweden and Austria. Volbeat‘s fifth album was entitled ‘Outlaw Gentlemen & Shady Ladies’…”

It should be noted that platinum records in Europe equate to over 10,000 units sold, which is a pretty impressive track record for a hard rock band.  In fact, the 2010 album Beyond Hell/Above Heaven was recently certified gold in North America with over a half a million albums sold, downloaded, or streamed.  More recently, Volbeat’s “Devil’s Bleeding Crown” has held first place on Billboard’s Mainstream Rock Songs for the last eight weeks running, as of June 5, 2016. Volbeat top such perennial favorites as the Red Hot Chili Peppers and Sixx:A.M. on the Billboard Rock charts. Seal The Deal & Let’s Boogie is Volbeat‘s sixth studio album.

This is a band to pay attention to. But, the ultimate question is, does it rock?  I’d rate it a yes, with a caveat. There are parallels to the old Nickelback standard…., “Devil’s Bleeding Crown” as one, which can be compared to Nickelback’s “Burn It To The Ground.” “Black Rose” and “Rebound” sound like hard rock covers of old ’50s songs. I do point out that “Black Rose” has Canadian rocker Danko Jones on guitar and vocals. Others, such as “Mary Jane Kelly” roll off without making an impact.  “Goodbye Forever” will be a rock radio hit with its easy to absorb acoustic/rock mix.  It evolves into a gospel sing along.  “Seal The Deal” is a grinder of a song which takes the album in a completely different direction — hard and heavy. “Battleship Chains” is a boogie rocker with a solid slide guitar and a hip-swagger feel. I was tired of “You Will Know” before the lyrics kicked in, but “The Loa’s Crossroad” woke me back up with its Metallica style driving guitar work. There are apparently a few other tracks available on the “deluxe” version, but I did not get those tracks. Someone did tell me though that one track “Slaytan” comes close to Slayer territory. Haven’t heard, can’t confirm.

Volbeat‘s latest album is worthy of a listen, based on the group’s history and the quality of tracks found on it. Whether  the songs on Seal The Deal & Let’s Boogie sound like Nickelback type songs, ’50s throwbacks, or modern hard rock, haters are gonna hate and lovers are gonna love. I don’t quite love, but I sure don’t hate.