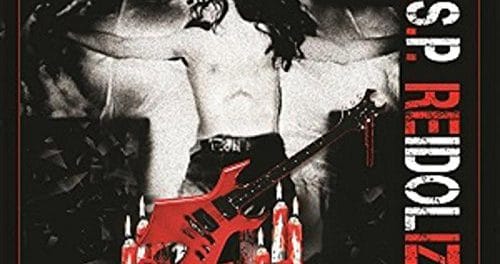 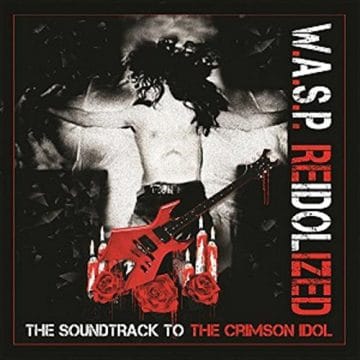 W.A.S.P.
REIDOLIZED — THE SOUNDTRACK TO THE CRIMSON IDOL
Released on February 2, 2018 (Napalm Records)

Review:
My feelings were mixed on Blackie Lawless re-recording what many consider to be W.A.S.P.‘s magnum opus — the 1992 released studio album The Crimson Idol. New Crashdïet singer Gabriel Keyes recently listed The Crimson Idol among his top three albums of all-time and Sleaze Roxx readers voted it number four in terms of their favourite W.A.S.P. albums. Personally, I have considered the record to be among W.A.S.P.‘s best albums and frankly, none of the records released since then have come close to matching it. I have to think that The Crimson Idol may be Lawless‘ favorite W.A.S.P. album as the shock rock frontman spent a large amount of time to make sure that the re-recording of the album was exactly how he wanted it. The question is — do we really need a re-recorded version of The Crimson Idol? The answer is “no.” That being said, I am actually happy that Lawless decided to re-record the album simply because it puts a spotlight on one of the greatest concept albums of all-time and it adds a little extra to the movie portion that accompanies the release. In other words, the only thought that I had when I heard about Reidolized — The Soundtrack To The Crimson Idol was “please, take my money.”

Before viewing The Crimson Idol movie, I listened to Reidolized a number of times and I have to say that I was disappointed. The songs are still top notch with monster rockers such as “The Invisible Boy,” “Chainsaw Charlie (Murders In The New Morgue)” and “Doctor Rockter” but the overall sound was fatter and more polished than the rawer original version of The Crimson Idol. In addition, 25 years have passed and although Blackie Lawless‘ singing on Reidolized is probably his best in 20 years, his lead vocals this time around are missing that extra angst and passion that was so prevalent on The Crimson Idol. Moreover, the additional bonus tracks consisting of “Hey Mama,” “The Lost Boy,” “The Peace” and “Show Time” are underwhelming at best. “Hey Mama” and “Showtime” each clock at less than two minutes and are really more like interlude type tracks rather than actual songs. “The Peace” is a rather monotone ballad leaving only one real song worthy to be on the record — “The Lost Boy” — alongside the other original (re-recorded) tracks from The Crimson Idol. I guess there was a reason why they weren’t included the first time around on The Crimson Idol and they really should have been kept off Reidolized as the record now finishes on a whimper leading up to “The Great Misconceptions Of Me” compared to the original The Crimson Idol album.

Probably the saddest part of Reidolized is Lawless‘ decision to change some of the most offensive lyrics on The Crimson Idol to PG rated stuff on Reidolized. For someone like me, who has been listening to The Crimson Idol for over 25 years where the best lyrical parts are firmly ingrained in my mind, hearing PG rated type lyrics instead of the original lyrics is quite disappointing. Some songs simply do not have the same powerful effect anymore. Case in point, the original lyrics for part of the stellar track “Chainsaw Charlie (Murders In The Rue Morgue)” state:

“I’m the president of showbiz, my name is Charlie
I’m a cock sucking asshole, that’s what they call me
Here from my Hollywood tower I rule
I’m lying motherfucker, the chainsaw’s my tool
The new morgue’s our factory, to grease our lies
Our machine is hungry, it needs your life
Don’t mind the faggots, and the ruthless scum
Before we’re done, son we’ll make you one”

A few key words have been replaced on Reidolized that make all the difference in the world to me in this key passage of the song. The words “Cock sucking asshole” are replaced with “Cock sucking rat hole” or something like that. Something “monster” replaces “motherfucker” and the word “faggots” has been switched to “maggots.” That’s just one example of Lawless changing his emotionally charged and perhaps degrading lyrics on The Crimson Idol to lacklustre, PG rated and ineffective lyrics on Reidolized.

Putting aside the re-recorded tracks on Reidolized, the CD/DVD is worth the price alone simply based on The Crimson Idol movie, which adds an extra dimension to the songs when you view it at the same time. I can’t think of another record that has a movie to play along to it and it’s really interesting to see how Lawless pictured the story unfolding compared to what I had in my mind for 25 plus years when listening to the lyrics and creating my own vision in my mind of how the story unfolded.  I remember seeing what I presume to be The Crimson Idol movie playing when Lawless and company made their Toronto stop on February 28, 2008 in support of The Crimson Idol – 15th Anniversary Tour but I was too engrossed in seeing W.A.S.P. perform at that time to really appreciate the movie playing behind the band. Accordingly, although I much prefer The Crimson Idol album to Reidolized, The Crimson Idol movie makes Lawless‘ latest release a must have for any W.A.S.P. fans out there.