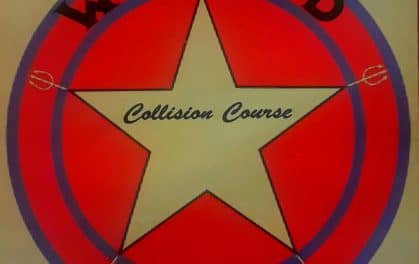 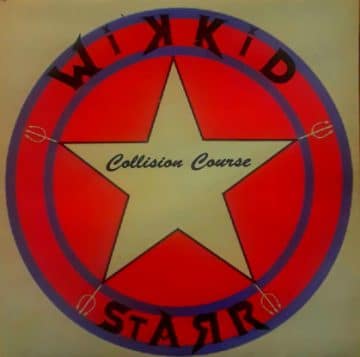 Review:
For bands like Metallica, Iron Maiden and KISS, if they come up with one great tune on a new studio album that they can consistently include in their setlist going forward, that new album has to be considered a success. If you think about it, the last studio track to consistently appear in Metallica‘s live set is “Fuel” which dates back to 1998’s Reload. For Iron Maiden, such a track is likely “Blood Brothers” from 2000’s Brave New World. And for KISS, it is arguably either the title track to 1998’s Psycho Circus or “Hell Or Hallelujah” off 2012’s Monster. Why am I a mentioning this in a review of what appears to be Wikkid Starr‘s debut album? Well, there is one song that stands out over all the others while the rest kind of fade away.

“Karma” is a great song. If only Wikkid Starr would have come up with more tunes like that on Collision Course. “Karma” engages the listener from start to finish with some screaming type vocals, a simple yet effective guitar riff to start the song, some solid background vocals and a generally upbeat yet angry feel throughout the song. “Zombie TV” and “Feed Me” both start off well but the chorus portion of each song is a real let down when compared to what preceded it. It’s a shame as both songs had a lot of potential. “Rip You To Pieces” reminds me of a bad or cheesy Alice Cooper song. Oddly, halfway into the album is a slow acoustic instrumental called “New Beginning.” Perhaps the interlude track is well positioned because it leads into “Feels So Right” which is not a bad song with some varying tempos. “Shooting Star” starts off with some ill advised falsetto like singing before launching into a sort of power ballad. I’ll pass on that one. Collision Course ends off with “Get It, Got It, Good” which has a familiar type laugh from singer Toney Richards to kick things off, followed by a great guitar riff, and some verses that remind me for whatever reason of Helix. I just can’t remember or pinpoint exactly which Helix song that this track reminds me of.

Given the one standout song on Collision Course and if the band had a lengthy catalogue to derive from, I would chalk up the album as a success for having one song that can be included in the group’s setlist for many years to come. However, Collision Course is the group’s seemingly only output and aside from “Karma,” “Feels So Right” and “Get It, Got It, Good,” there is nothing on the album that I want to revisit now that my album review is nearly over. It should be noted that the album almost did not make it to fruition as I understand that producer Bill Krodel passed away while guitarist Ashlyn Childs left the band before the release of the album. From what I gather, the group has a new line-up since it is scheduled to play at the The Whisky in California this April. Wikkid Starr certainly seem to have the potential with Richards‘ strong “made for the ’80s” voice to come up with a better effort next time out.

If you’re interested in checking out Collision Course, you can do so free of charge by just going on the band’s website where you’ll be able to hear a good snippet of each track on the album. Interestingly, I could not find the CD cover anywhere on the internet. Apparently, there were only 600 physical copies printed of the CD and most were dispersed in South America back in 2015, which explains  in part why the cover did not seemingly make its way onto the internet. Thank you to Richards for sending me a copy of the cover artwork.