Big news for Canadian fans of Keel and the Ron Keel Band as the group’s frontman Ron Keel will be touring in Canada for the fist time since 1985 with three dates announced for the cities of Toronto, Ottawa and Quebec City. 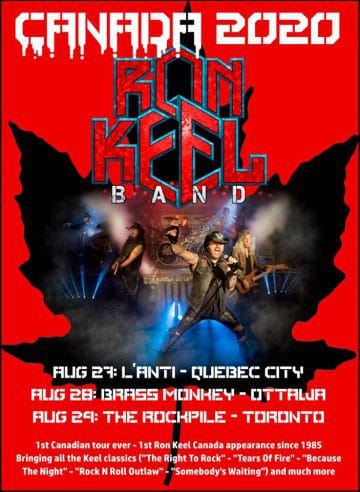 “Ron Keel Band, fronted by million-selling vocalist Ron Keel, is bringing “The Right To Rock” to Canada. Tour dates have been announced for Toronto, Ottawa and Quebec City August 27-28-29; this marks the band’s first expedition across the border and Ron Keel’s first time on a Canadian stage in 35 years.

“If you had told me back in 1985, when “The Right To Rock” [Keel’s major label debut, produced by Gene Simmons] was released, that my first tours of Canada and Australia would happen in 2020, I would have called you crazy,” Ron said. “But Ron Keel Band is living proof that rock n roll dreams do come true. I know there are many Canadian fans that have been waiting for this as long as I have.”

Ron Keel Band delivers a show that features music from throughout Ron Keel’s career, including the classic hits “The Right To Rock,” “Tears Of Fire,” “Somebody’s Waiting,” “Because The Night,” and “Rock N Roll Outlaw” – fan favorites “I Said The Wrong Thing To The Right Girl,” “Speed Demon” and more – plus all the new material from Ron Keel Band’s acclaimed debut album “Fight Like A Band,” as well as touching on Ron’s 80’s metal legacy with Steeler and Black Sabbath.

“I want to thank my friend [premier rock journalist] Mitch Lafon for all his help,” Ron adds, “and for introducing us to these great venues and concert promoters who have done such a great job putting this tour together.”

Each concert will also include a meet & greet at no additional cost. For ticket links, visit the Events page at http://ronkeel.com/“

The new summertime single from Ron Keel Band, from the EMP Label Group album “FIGHT LIKE A BAND” – http://ronkeel.com & http://ronkeelband.com