The screening of a documentary titled Jason Becker: Not Dead Yet featuring former David Lee Roth guitarist Jason Becker will be taking place at the Granite High School in Granite Bay, California, USA on Saturday, February 8, 2020 from 2:00 to 8:00 pm. 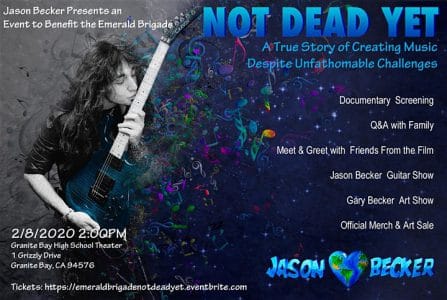 Child prodigy Jason Becker was diagnosed with ALS in the same week that he began working as David Lee Roth’s lead guitar player. He was just 19 years old. He has lived with ALS for more than 3 decades and is currently the person living with ALS the longest.

Once one of the world’s fastest guitar players, Jason can now only twitch one thumb and move his eyes. He continues to compose and communicate through a series of eye movements; his latest album “Triumphant Hearts” was released a little more than a year ago.

The documentary “Jason Becker: Not Dead Yet” follows Jason through his life and creative career with ALS. It is a truly inspirational tale of overcoming the odds and creating music no matter what curve balls life throws your way.

Some of Jason’s personal guitar collection will be on display.

Gary Becker will have an art show.

Official merchandise and art will be available to purchase with all profits going to EBSO, the non-profit organization that supports the Emerald Brigade Music Program at Granite Bay High School.”

Wikipedia summarizes Becker‘s life as follows (with slight edits): “Jason Eli Becker (born July 22, 1969) is an American musician, songwriter and composer. At the age of 16, he became part of the Shrapnel Records-produced duo Cacophony with his friend Marty Friedman. They released the albums Speed Metal Symphony in 1987 and Go Off! in 1988. Cacophony broke up in 1989 and Becker began doing solo work, having released his first album Perpetual Burn in 1988, also through Shrapnel. He later joined David Lee Roth‘s band and recorded one album with him, A Little Ain’t Enough.

Becker‘s performing career was cut short by amyotrophic lateral sclerosis (ALS). In 1996, Becker lost the ability to speak, and he now communicates with his eyes via a system developed by his father. Despite his disability, he continues composing by using a computer and has since released with Shrapnel Collection, a “best of” album of his favorite songs and three new songs. Becker is now the longest currently living person with ALS, since the death of Stephen Hawking in 2018.”