Former Skid Row frontman Sebastian Bach joined Guns N’ Roses on the second date of their ‘Not In This Lifetime” tour at the T-Mobile Arena in Las Vegas, Nevada, USA on April 9, 2016 for a spirited version of the Guns N’ Roses classic “My Michelle.” 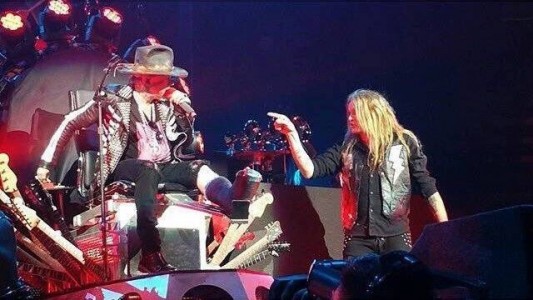 Back in late December 2015, Skid Row‘s singer Tony Harnell left the band which ignited rumours that Skid Row might reunite with Sebastian Bach, which would help the group land the opening slot for the rumoured Guns N’ Roses “reunion” tour. Although Bach seemingly opened the door for a reunion with his former Skid Row bandmates to take place, this did not materialize as Skid Row elected to apparently continue with singer ZP Theart instead. Skid Row ended up not opening (thus far) for Guns N’ Roses on the latter’s ‘Not In This Lifetime’ tour.

The fact that Bach showed up to play with Guns N’ Roses on the second night of the tour further lends support that Skid Row could have likely landed the opening slot on Guns N’ Roses‘ current tour had they reunited with Bach in the months beforehand.

With the three remaining original Guns N’ Roses members (Axl Rose, Slash and Duff McKagan) rumoured to make millions of dollars between themselves for each show that they play on the ‘Not For This Lifetime’ tour, it seems that a lucrative monetary opportunity has been missed by Skid Row.