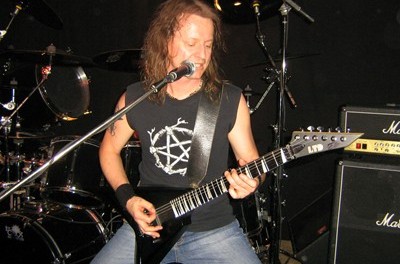 The Canadian power metal group, Shock, have released a lyric video for the first single “Sonic Assault” from their forthcoming new album Forewarned, which will be released on Friday, November 13, 2015. 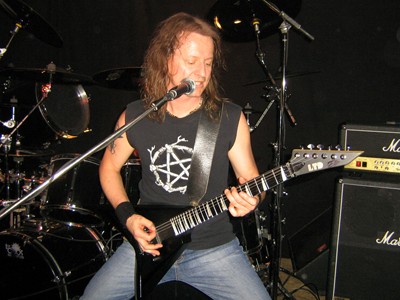 “Sonic Assault” dates back to Shock‘s second demo, which was released in 1986 along with the songs “Full Speed Ahead,” “I’m Dangerous” and “Slashin’ To Live.” The song “Sonic Assault” was also part of Shock‘s never released 1987 album Burning A Hole Through The Heavens. Shock disbanded in 1990 frustrated in not being able to obtain a proper recording contract. Twenty one years later, the group reformed with band founders, Tony V (lead guitar, lead vocals) and John Tennant (guitar), along with Steve Monette switching from guitar to bass and Chad Wallis (drums). The band re-worked eight of their songs from the ’80s and released their debut album Once Denied to critical acclaim in 2013. Forewarned is Shock‘s sophomore effort and includes eight more tracks dating back to the group’s ’80s era that have been re-worked, re-arranged and properly recorded. Shock‘s line-up for Forewarned is the same as the one for Once Denied except that Taylor Calderone instead of Chad Wallis is now handling the drums for the group. Monette and V were recently interviewed by Sleaze Roxx and explained at that time the change in drummer within the band’s line-up.

In terms of the first single “Sonic Assault” and speaking exclusively to Sleaze Roxx, Monette stated: “We chose “Sonic Assault” because it has always been a crowd favourite when we play it live. During the mixing process and afterwards, several people who heard it all commented on how much they liked it and how it really grabbed them immediately. It’s a simple, fast and catchy song, which we felt would be a great way to introduce people to the new album — both people who know of us and those who have no idea who we are. It’s meant to give you a sample to then draw you in to the more complex and dynamic songs — so let’s call it a gateway song…” Monette added “Having made all the videos for the band to date, it doesn’t hurt that “Sonic Assault” is short because I hate editing videos [laughs]!”

Shock‘s new album Forewarned is available for pre-order at the band’s Bandcamp page.