For the last 40 plus years, Brian Vollmer, the affable and insightful lead vocalist for Helix, has been leading the group through good times and bad times. Helix are still active all these years later having just released a video for the single “The Devil Is Having A Party Tonight” and Vollmer has also recently released his second solo album entitled Get Yer Hands Dirty. In an interview with Sleaze Roxx earlier this year, Vollmer spoke about Helix‘s transition from the bar scene to casinos and festivals, and today, the singer mentioned it again while announcing some of the group’s plans for 2018. 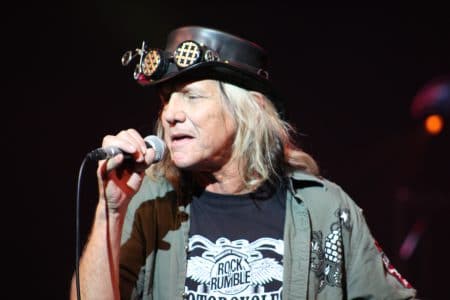 The following message was posted in part on Vollmer‘s Facebook page earlier today:

“So much is happening here at Planet Helix before Lynda and I leave for Fort Myers. We haven’t had a spare minute.

Dates for 2018 are coming in left and right. In the next couple of weeks we’ll be announcing five MAJOR festival/casino dates for next summer, stretching from Edmonton/Calgary to Montreal. Piqued your interest? It should.

Over the last couple of years we were squeezed out of the bars, ironically because they couldn’t afford the band anymore. For years my agent Bernie Aubin told me that I needed to quit playing them, hold out for more money, and only play festivals/casinos. This is where most of the acts from the 70’s & 80’s played and where they made a lot more money, had better accommodations, better everything. I resisted, because at the time that was the main way I sold CDs, and for me, it was always about the music first. Sadly, CDs for artists in general became less and less over the past couple of years. There are still hold-outs however. For instance, when I went to send my solo album out to Eddie Trunk, he insisted I send him a CD. When I visited one record store I recently sold some vinyl to here in London, they told me the largest % of product sold in stores is still CDs. So there ya go daddy-o.

Anyway, over the past couple of years the bar scene has dried up. Ditto for Europe, where we toured in 2014. We didn’t know it then, but at the time that circuit was in it’s death throes. In Canada the reason why is quite simple-money. There’s almost no way a club can compete against a festival or a casino. In the case of festivals, a lot of them are tied in with charities, which makes them eligible for government largess (if you know what I mean). Rock the Park here in London receives something like $170,000 in grant money from all levels of government. The gig is outside in a clean environment, on a big stage with concert lighting and effects, and usually runs from 7P.M. until midnight at latest. Contrast that with a dark, dingy club, with a “Frankenstein P.A.” and 6 lights (4 which don’t work-LOL) No contest. Ditto for casinos-excellent sound & lighting, great sight lines, you can have dinner before the show, etc etc. PLUS the casino has an extra benefit from the people in attendance-they’re more concerned about the people gambling after the show than the money they’re making on the show.

Now that we’re back on a concert stage with concert lights, P.A., sight lines, etc etc. the band can really shine. After all, you can be the tightest unit in the world but if you have a shitty soundman or you’re playing through shitty gear, what’s the point?…”

Helix‘s “The Devil Is Having A Party Tonight” video: