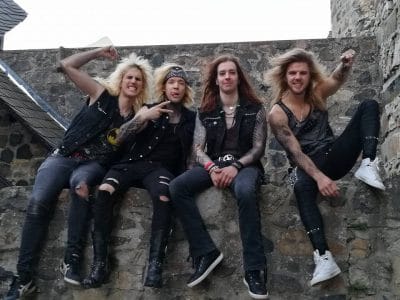 The following message was posted in part on Snakebite‘s Facebook page earlier today (with slight edits):

“Attention! The highway is full of snakes! Watch SNAKEBITE riding down to hell on hot wheels and with yelling engines.

Curtain up for our brand new music video tasting like beer, blood and gasoline: “RUN FAST”.

Sleaze Roxx stated the following in its review of Snakebite‘s last studio album Princess Of Pain, which landed the #4 spot on Sleaze Roxx’s Top Ten Albums of 2015: “Although the German rockers’ sound reminds me of more straight forward rocking bands from the ’80s — I have been racking my brain trying to give you some ’80s bands to compare with but none come to mind — the group appears to be trying to distance themselves from the “sex, drugs and rock n’ roll” mantra with positive messages against standardized and slavish lifestyles. I would not be surprised in the least if Snakebite‘s Princess Of Pain found itself nestled in Sleaze Roxx’s Top Ten Albums of 2015 at the end of the year. It is a shame that Snakebite is based in Germany because I have the feeling that their songs would translate really well live and this Canadian’s chances of seeing them play live at this time appear pretty slim.”