Swedish rockers Spiders have released a new single “Dead Or Alive” and have been hard a work on a new album. The single can be heard via Spotify. 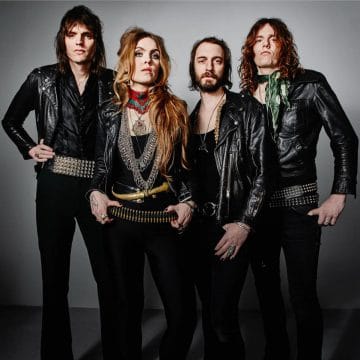 The following message was posted on Spiders‘ Facebook page back on January 15, 2018:

“You may think that weve been on a really long holiday, but noooo! Last year we were killing it in the studio writing our biggest record EVER.

This Friday we’ll release the first single “Dead or Alive”, guess how stoked we are?!”

Sleaze Roxx stated as follows in its concert review of the Spiders‘ performance in Buffalo, New York, USA back in February 2016: “I’m not sure what I was expecting but the Spiders sounded really good on stage. The sound seemed crystal clear and the heavy guitar riffs from John Hoyles coupled with the thunderous rhythm section of Griphammar and Harryson mixed with the mild Swedish laced English from singer Ann-Sofie Hoyles made for an impressive musical display. Although I recognized all of the songs that were played that I heard except one, coming up with the song titles is somewhat challenging in that I always just press play when listening to the Spiders’ stellar and last full length album Shake Electric without looking at the song titles.”

YESSSSS! It’s finally out, our new single, our MASTERPIECE NEW SINGLE!!! Let the world know, Spiders is back with “Dead or Alive”!!! Listen to it heeere: https://lnk.to/DeadOrAlive