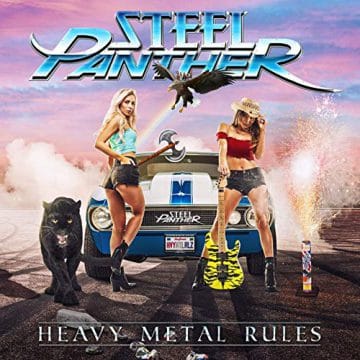 Sleaze Roxx stated the following in its review of Heavy Metal Rules:

“Usually a band will release its strongest songs as a preview to get people to pre-order / buy its new record so by this time, I was quite concerned that Steel Panther‘s new offering Heavy Metal Rules would not meet my lofty expectations and not measure up to even All You Can Eat and Lower The Bar. I am sad to say that this is indeed the case. Steel Panther have for the first time released an album with only a handful of really decent songs and with unfortunately and surprisingly, a couple of stinkers. I do note that this is the shortest Steel Panther studio album ever with only nine songs given that the opening track “Zebraman” is really just an audio clip from the film Heavy Metal Parking Lot.

I know that at one point Steel Panther apparently lost their entire recordings for this album as frontman Michael Starr explained in an interview with The Metal Voice that bassist Lexxi Foxx had taken the hard drives from the recording sessions and accidentally dropped them on the ground resulting in the files being gone with no back ups. Did that play a factor with the subpar material that can be found on Heavy Metal Rules and the album only containing nine actual songs? I don’t know but I was expecting nine killer tracks from Steel Panther with only nine actual songs on the record.”

The official music video for the song Heavy Metal Rules from the album of the same name.