Tesla release video for new song “Save My Goodness” 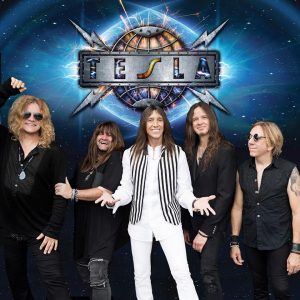 Sleaze Roxx interviewed Tesla guitarist Dave Rude less than two months ago. Rude stated the following about Tesla‘s new track “Save My Goodness”: “Literally last summer, we started demoing it up on tour and did a lot of really sort of intensive pre-production work and all the details so it looked pretty much thought out, planned and done before we went into the studio to record the real version. We kind of knew exactly already where everything was going to go where by the time that we went into the studio in Sacramento. We took one day, maybe two days, to record the actual version.”

Rude went on to say: “Phil really took an interest to us from day one. We’ve been working on that song “Save That Goodness” from the live record. You know, it went really well working with him so we were all kind of interested in taking it further. So now we are doing an original record with him actually producing. It’s cool. It sounds different. He’s got that Mutt Lange school of production, which is so legendary and really cool. I am really excited to be using some of these sort of like methods. The stuff that we have done so far, it sounds really fantastic so I am excited! The songs will sound a little bit different and I think people will dig it.”