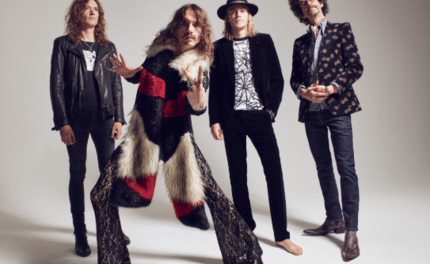 UK rockers The Darkness consisting of frontman Justin Hawkins, guitarist Dan Hawkins, bassist Frankie Poullain and drummer Rufus Tiger Taylor will be playing their new album Easter Is Cancelled in its entirety plus their hits during their upcoming North American tour, which starts on April 13, 2020 and continues until May 23, 2020. 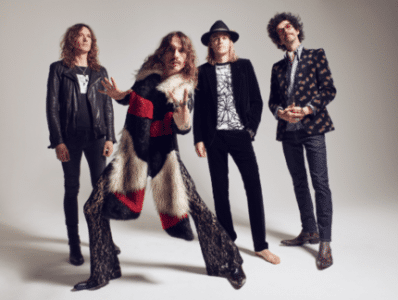 “Multi-platinum selling UK rock band The Darkness – frontman Justin Hawkins, guitarist Dan Hawkins, bassist Frankie Poullain and drummer Rufus Taylor – released Easter Is Cancelled, their first ever concept album, in October via Cooking Vinyl. The band will spread their Easter Is Cancelled message across North America on their headlining Easter Is Cancelled Tour kicking off on April 13th in Edmonton, Alberta at Union Hall and wrapping on May 23rd in Chicago at Park West. The Darkness will play Easter Is Cancelled in full, followed by a set of their greatest hits and fan favorites. The shows promise to reflect the grand scope and vision of the new album alongside the band’s spectacular canon. Tickets go on sale Friday, January 17th at 10am local times HERE.

Justin Hawkins shares, “North America! We come to you again, humble in our mission but resolute in our purpose. Join with us in the benediction of ROCK, as we bring our Easter is Cancelled World Tour to your spume-flecked shores. We cancelled Easter and now we are going to cancel your souls – let’s reboot together in the epiphany that only 150% pure adrenalin can bring. You are me, I am you, and music is the river that will carry us to our destiny. P.S. concert tickets available at extremely reasonable prices from all usual outlets.”…

Easter Is Cancelled is a mini-rock opera examining the role of the musician in the barbarous culture of the world today. At the core of the tale is love, loss and heartbreak, where redemption is ultimately found in the brotherhood of band friendship and the power of the guitar. The album boasts new single and the video for “In Another Life” that portrays Justin Hawkins banished to hell only to be redeemed by the power of rock pulsating through his guardian angel bandmates and a beautiful archangel. “Rock And Roll Deserves To Die” sees the band hailing the death of rock and roll in an epic five-minute masterpiece featuring monumental riffs, thunderous bass and almighty drums, “Heart Explodes” is a rock aria that finds The Darkness baring all in a multitude of emotions reflecting the hardships, struggles and changing relationships of life. “How Can I Lose Your Love” is a huge rock anthem steeped in emotion, featuring space-age synths, a gigantic chorus with beautiful hands-in-the-air moments, and almighty guitar solos, while title track “Easter Is Cancelled” encapsulates the explosive majesty of the record. 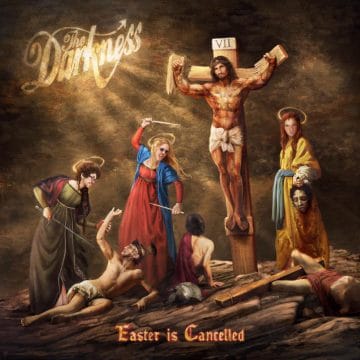