The Tip have provided via YouTube (see below) a preview of their new album Sailor’s Grave, which will be released on August 9, 2016. 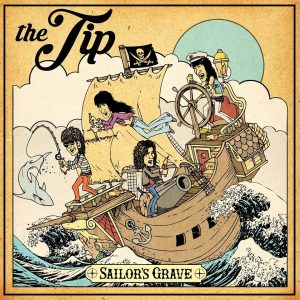 Back on July 5, 2016, Sleaze Roxx had the privilege of premiering The Tip‘s video for their new song “Rock N Roll Heaven” from their upcoming new album Sailor’s Grave.

Sleaze Roxx stated the following in one of its two reviews of The Tip‘s self-titled debut album: “In closing, The Tip are on my radar and should be on yours. The gang is proficient in recreating that vibe that could arguable be debated stemmed from Aerosmith or T. Rex or even David Bowie and then sparked the gleam and the dream in the eyes of a number of like minded rock n’ rollers. From the aforementioned Kix to Salty Dog to Tora Tora to Redd Kross to to to… you get the picture. Great great stuff here so please seek it out and tell your friends. The Tip are a great band doing what we all secretly want to do. They look as if they are having the time of their respective lives and they are looking absolutely ma’vahlous doing so! Here’s to the, what I am hoping is the impending release of, follow up to the self-titled album, which I will title “the shaft”. Sorry boys couldn’t help myself as I am sure you are all aware (or soon will be) the possibilities are endless both musically and in innuendo for The Tip.”