Tokyo Motor Fist featuring lead vocalist Ted Poley (Danger Danger) and guitarist Steve Brown (Trixter) have announced that they will be releasing their sophomore album in 2020. 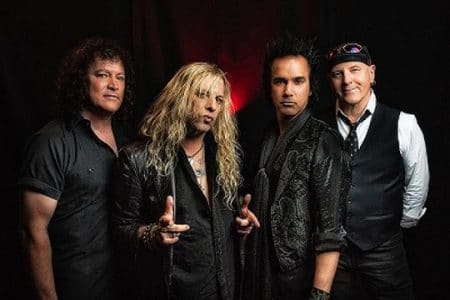 The group’s self-titled debut album finished at #18 on the Sleaze Roxx Readers’ Top 20 Albums of 2017 to which Sleaze Roxx stated:

“With Danger Danger seemingly never releasing a new studio album, first it was bassist Bruno Ravel who hooked up with some Danger Danger alumni — singer Paul Laine and guitarist Rob Marcello (the latter is still listed as the guitarist in the band but does anyone really believe that is the case with Trixter guitarist Steve Brown or Ted Poley solo band axeman Steve “Man” Mazza handling the guitar duties ever since late 2016) — to form The Defiants. That group’s debut album fared very well given that it landed the #2 spot on the Sleaze Roxx Readers’ Top 20 Albums of 2016. Not to be undone, Poley formed a new semi “supergroup” with Brown, Greg Smith (Ted Nugent, Rainbow, Alice Cooper) and Chuck Burgi (Rainbow, Blue Oyster Cult, Joe Lynn Turner). The result is a much lower charting effort on the Sleaze Roxx‘s year-end poll so I am going to acknowledge that The Defiants have come up with a much stronger record than Tokyo Motor Fist. In any case, it’s nice to get two records instead of one in the form of two spin off records from a few current and/or former Danger Danger members rather than a Danger Danger studio album that may never actually materialize.”

From the album TOKYO MOTOR FIST.