Cinderella frontman Tom Keifer has unveiled a new video for the title track of his new studio album Rise, which was just released today via Cleopatra Records.

“Tom Keifer fans have been waiting six years for new music. That time is finally here. 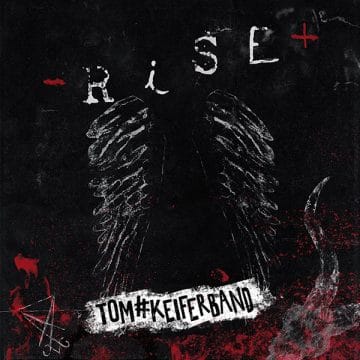 It quickly jumped into the Top 40 on Amazon’s “Best Seller” list within hours of its release, and it’s currently sitting at #25 on iTunes’ “Album” chart for all music genres.

“Rise,” the title track, was written by Tom Keifer, Savannah Keifer with Keifer and Shawna Thompson of Thompson Square. The official music video, directed by Vicente Cordero, recently premiered on Billboard.com and is streaming now on the label’s official YouTube page.

“For the ‘Rise’ video, we wanted to capture the band performing the song with an uplifting look,” Keifer explains. “We chose a plain white studio that just happened to have a matching white grand piano. It felt like the perfect environment for the feel of the song. Director Vicente Cordero did an amazing job capturing the energy of the band in this simplistic, beautiful setting.”

“The last line of the second verse of ‘Rise,’ ‘Won’t be the last time…I’m gonna rise,’ sums up a simple truth,” he continues. “Along with all the beautiful good times and highs we are blessed with in life, there will always be those unexpected lows we have to pull ourselves up from over and over. That’s the very heart of what the song is about. As much of the entire album’s lyrics speak to finding strength in those times of adversity, we felt the song was the perfect title track.” Keifer goes on to say, “As a band, we have experienced so many of the amazing gifts life can bring, but have also walked each other through some very hard times. I think that’s why Rise was such a natural, effortless record for us to make. All of the life we have shared together has created a bond that is in the grooves of this record. Each member of the band brought something special to the energy of Rise. It is a truly collaborative creation.”…

Keifer previously released a lyric video for “Touching The Divine,” as well as a video for the album’s first single, “The Death Of Me,” featured on Apple Music’s “Breaking Hard Rock” playlist. His creative renaissance is fully on display via the eleven tough ’n’ tender tracks that comprise Rise. Produced by Tom Keifer, Savannah Keifer, and Kyle O’Connor, Rise scales renewed sonic heights. From the tasty slide work that stamps “Touching the Divine,” the nontraditionally arranged, heavy, dark jam of “Untitled,” the breakneck thrust of “All Amped Up” to the tender coda of “You Believe in Me,” Rise signifies the ongoing evolution of the former Cinderella frontman as a person, songwriter, and bandleader. It’s the aural portrait of an artist who, to borrow a phrase, is still climbing.

In touring news, Tom Keifer and #keiferband have been on a vigorous trek ever since the 2013 release of his debut solo album, and they’re not slowing down anytime soon. Their current headlining tour began July 30 in Nashville, TN and continues through the end of 2019, with more shows being added in the coming weeks and already being planned for 2020….”

“Rise” the title track from the brand new Tom Keifer #keiferband release “Rise” http://www.tomkeifer.com/preorder/ https://orcd.co/tomkeiferrise This collection of 11 brand new songs which includes the raucous first single “The Death of Me” rocks with a fury and passion that is sure to make critics and fans take notice!