Mötley Crüe drummer Tommy Lee continues stay in the public limelight even for events that may have happened more than two decades ago.

Locklear‘s troubles have been documented by Wikipedia which states in part (with slight edits):

“In September 2008, Locklear was pulled over and arrested on suspicion of driving under the influence by a California Highway Patrol officer just outside Santa Barbara after she was seen driving erratically. Police had been tipped off about Locklear‘s driving by Jill Ishkanian, a former reporter and editor at Us Weekly magazine, who saw Locklear outside a market in Montecito, California. Ishkanian photographed the incident and then sold the photos to celebrity news website TMZ.com for $27,500, though she claims it was entirely a chance meeting and denies following Locklear or setting her up to obtain photographs. Locklear was formally charged on November 17, 2008, with one misdemeanor count of driving under the influence. A blood test detected no alcohol or illegal narcotics, but Santa Barbara County Deputy District Attorney Lee Carter stated that they believe the prescription medications she consumed for her anxiety and depression “could have impaired her ability to safely drive a motor vehicle”. On January 2, 2009, Locklear pleaded no contest to reckless driving, and in return the district attorney dismissed the DUI charges. Locklear was sentenced to three years of informal probation, a DMV driver safety class, and a $700 fine.

In March 2008, a 9-1-1 call was made by someone who claimed to be Locklear‘s doctor, who said that Locklear was trying to commit suicide. Emergency responders were dispatched to Locklear‘s home. Her publicist later said that Locklear had never requested any medical assistance and the Ventura County Sheriff’s Department later stated that no further action was taken once they arrived at Locklear‘s Westlake Village home, as she appeared to be fine. They did, however, state that they believed the call to be genuine. On June 24, 2008, she checked into a medical facility in Arizona for psychological ailments including anxiety 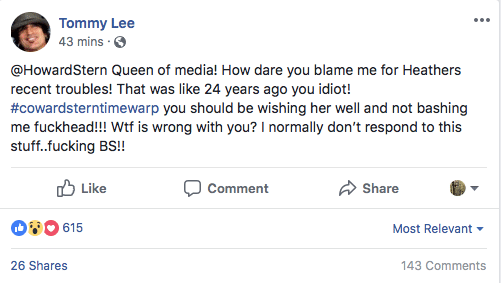 and depression, and requested an in-depth evaluation of her medication to receive proper diagnosis and treatment. Her agent confirmed that she was suffering from anxiety and depression. On July 23, 2008, Locklear returned home after four weeks of treatment at the facility.

On January 12, 2012, Locklear‘s sister called 9-1-1 when she believed Locklear was in danger after reportedly taking prescription drugs and alcohol. Emergency personnel responded and Locklear was taken to Los Robles Hospital in Thousand Oaks, California, but was reported to be out of danger the following day.

In February 2018, Locklear was arrested for domestic violence and battery against a police officer. She was charged with one felony count of domestic violence and three misdemeanor counts of battery on a police officer. As deputies arrived at her Thousand Oaks home, she allegedly kicked three of the arresting sheriff deputies and told the deputies she would shoot at them if they ever came into her home again. According to audio of the 911 call, Locklear’s brother called the police after coming to her home, where he found Locklear and her boyfriend arguing. Locklear was released on a $20,000 bond just before 6 a.m. the next day. Heather‘s boyfriend, former American Motorcycle Association motocross racer, Chris Heisser, was arrested on a driving under the influence charge in Thousand Oaks, hours after Locklear had been taken into custody. She is scheduled to appear in court on March 13. Police with a warrant searched her home for a weapon on March 12, but found none….”

Despite Locklear‘s last decade of legal troubles, it appears that radio mogul Howard Stern accused Lee of causing Locklear‘s troubles which prompted the drummer to take to Facebook earlier today to air his disapproval (see above Facebook post).