Former Scorpions guitarist Uli Jon Roth was recently interviewed by Andrew Catania of All That Shreds and spoke about his upcoming US touring plans in May 2018. 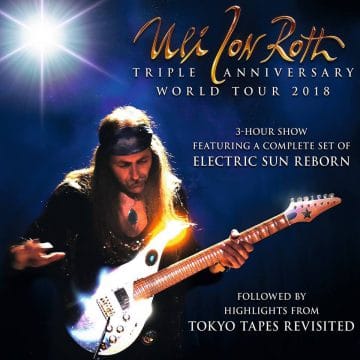 Roth stated (with slight edits): “We will have support acts in some venues, but we’re not bringing a support act.  We’re doing what’s called the Triple Anniversary Show. Why it’s called the Triple Anniversary Show because in 1978, the year I left the Scorpions, I formed Electric Sun.  That was 40 years ago.  We’ve looked at my periods with the Scorpions. Now I thought I’m going to do the same with the Electric Sun period which started in 1978 and we’re going to go with a whole tour. I’m going to do the best of that material.  It’s going to be called Electric Sun Reborn.  We had a lot of fans in America at that time, but we only ever did one tour in America in 1985.  Then in 1986.  I started long hibernation process for 13 years where I went more into just the classical music.

I felt it would be a good idea to do the Electric Sun songs. A lot of people have asked about these songs. We’re going to bring them back to life and see what we can do with them and maybe how to better them. Then the second anniversary is the end 40 years anniversary of Tokyo Tapes, which was also important. What we’re going to do at the end of the show is we’re going to close with a few songs from Tokyo days. The third anniversary is maybe the biggest of all of them because that’s my 50th anniversary playing live. It started in 1968. So I’m one of these dinosaurs with the guitar who have already been on stage in the sixties.”

In terms of recording new music, Roth stated: “Absolutely. There’s still a lot to be said. It’s become a lot harder to do albums nowadays because they need to be financed differently because back then albums tended to fund themselves. Now records tend to cost as much or more then what it cost to make the record. So mainly you’re working for free, which is fine. And should be fine in music. We all have to make a living, and it’s difficult. I love and hate making an album at the same time. I’m not one of these people that can walk into a studio today and tomorrow have an album ready. I take my time to make a record. It’s a serious process for me.”

You can read the rest of the interview with Roth at All That Shreds.