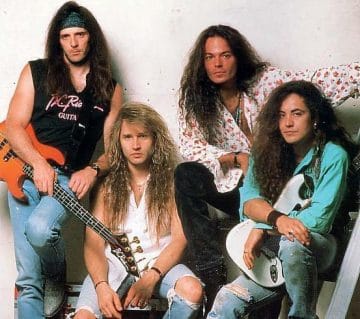 Sleaze Roxx has just been made aware of an unreleased song called “Badlands” from the legendary Badlands featuring the now deceased singer Ray Gillen, guitarist Jake E. Lee, bassist Greg Chaisson and drummer Eric Singer. The song has been available for streaming on YouTube since May 1, 2008.

Chaisson was asked today via Facebook whether the song was written during the sessions for Badlands‘ debut self-titled album to which he replied: “No it’s just a song that we wrote early on when we first got together. During the first few months.” Chaisson also indicated that the track is called “Badlands.”

Wikipedia states the following about Badlands: “Badlands was a band founded by former Ozzy Osbourne guitarist Jake E. Lee and former Black Sabbath members Ray Gillen and Eric Singer. Badlands also featured bassist Greg Chaisson. After the first Badlands album, Eric Singer was replaced by Jeff Martin. The group lasted from 1988 to 1993 and released two albums, Badlands (1989) and Voodoo Highway (1991) before Gillen left and was replaced by singer John West from New York. Ray‘s death in 1993 effectively ended any hopes of re-uniting the project. The album Dusk (a demo recorded in 1992 – 1993) was posthumously released in 1998.”

Killer song by Badlands. It’s called Badland….unreleased…killer song!!The mighty Ray Gillen with his powerful pipes, and once again, Jake with another p…