Day Two of the Hair Metal Heaven Festival that took place in Hull, UK from August 25 to 27, 2017 was not without some complications as the VIP special guest performer Michael Monroe ended up not performing. Monroe was scheduled to play a special intimate acoustic performance for VIP ticket holders apparently at a different location towards the end of Day Two. Monroe and Hair Metal Heaven had differing views on what occurred.

The following message was posted on Michael Monroe‘s Facebook page about 17 hours ago: 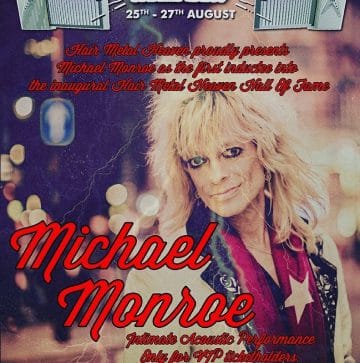 It’s hard to believe that at this point in my life and career I would end up in such an amateurish disaster like last night at the Hair Metal Heaven event in Hull. Due to reasons beyond our control it was not possible for me to perform.

I expect the person responsible for this to own up, and admit his mistakes and failures and apologize in public – to the audience and to me.

My sincerest apologies to people who showed up to see me play. I’ve never been in the habit of canceling gigs and absolutely can’t stand it when that happens!!! Especially for a reason like this…

The following message was then posted about an hour later on Hair Metal Heaven‘s Facebook page (about 16 hours ago):

Last night as part of our VIP show we had put on a free show for our VIPs. Unfortunately after 2hrs of conversation Michaels management decided to pull the plug. We were gutted. We tried absolutely every way to make it work but it wasn’t to be. We tried everything right up until the death. 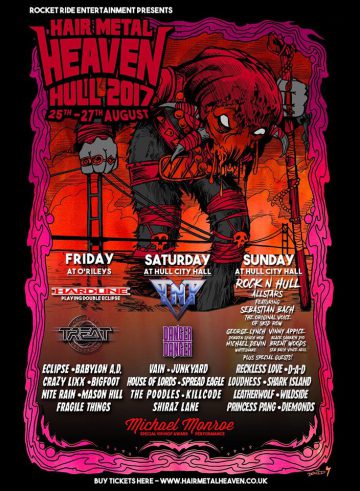 The weekend has seen a few teething issues but we have tried our very best to get through it and deliver a great show for everyone.

Today is another day and there are 9 great acts to see inc Seb Bach Allstars.

We apologise wholeheartedly for those waiting patiently at The Fruit last night. I tried every conceivable way to make Michaels management know that we would work with them towards a solution but they didn’t want to know.

On a personal level as the promoter I can only apologise a million times over to everyone. I know people are going to be upset but hopefully the performances over the weekend have been enjoyed by one and all.

Let’s look forward to today and get the house rocking again.

While in here I just want to say a massive thank you to those who have helped out over the weekend – you have all been amazing.

The line-up for Day Two was still an impressive one even without Monroe‘s performance for the VIP ticket holders. Day Two boasted the following line-up: TNT, Danger Danger, Vain, Junkyard, House Of Lords, Spread Eagle, The Poodles, Killcode and Shiraz Lane. The video footage below does not reflect all of the band performances on Day Two simply because the YouTube video footage that was found at this point for Day Two was only for the three bands below.