Former Dio and Whitesnake, and current Def Leppard and Last In Line guitarist Vivian Campbell was interviewed by Shut Up & Rock On during which he answered a lot of questions about his time in Dio. 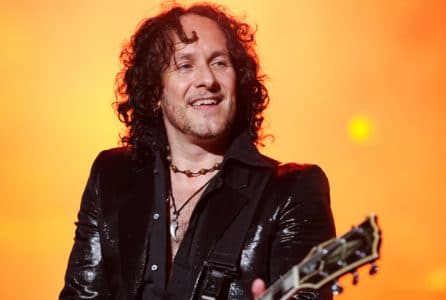 With respect to whether his path had crossed with any members in Dio prior to joining the band, Campbell stated: “Jimmy was the only one I knew. I had never met Ronnie or Vinny before and in fact, I was a huge Dio fan. I mean I had ‘Rainbow Rising’, I had ‘Long Live Rock n Roll’. Ironically at the time, I was never really much of a Sabbath fan but at the time this all happened I was really into ‘Heaven and Hell’, the album. I would listen to it in my car a lot. So yeah I was a big Ronnie fan, it’s safe to say I was extremely nervous. In fact, I think it’s safe to say the whole time I worked with Ronnie I was nervous around him. This was a guy I’d been listening to since I was like 12 years old or whatever, he was a big rockstar, you know? A major star. I was just an unknown kid from Belfast. He was also a lot older than me too, so it was sort of a generational thing, you know? I don’t think that Ronnie and I were ever really that comfortable with each other, socially. It was always sort of an awkward relationship but we worked very well together musically. As long as we didn’t have to talk to each other, it was great.”

In terms of his favorite Dio album that he was a part of, Campbell stated: “The first two were definitely a lot more fun than the third. ‘Sacred Heart’ was a very very difficult record to make for many reasons. I also think that musically it’s a little overly complex for the band. I think we started to kind of wander off course a bit. I know that Jimmy and Vinny feel the same about that. It was a more difficult record to write and it was a more difficult record to record. Ronnie was going through some very dark personal issues at the time; he was separating from his wife Wendy who was also the manager of the band. But Ronnie was in a very very dark place and he wasn’t easy to be around at that time. Ronnie was also producing the record…that made it exceptionally difficult for everyone involved. So that was a dark time. Maybe that kind of clouds my being able to reflect objectively on that record, I don’t have great feelings for that record. But ‘Holy Diver’ and ‘Last in Line’ are two great records. They were very easy to write, they were very easy to record.”

In regard to the turning point that led him to not be in Dio anymore, Campbell explained: “Well I was the thorn in Dio’s side. When the band was formed, that night in September ’82 in London, Ronnie kind of sat us down once we played, and this was the first time we all met and played together, Ronnie sat us down afterwards and he was super excited with what he was hearing. He said here’s the story…and he kind of explained to us that he had left Sabbath with Vinny and that he had a record deal and that we were gonna call the band ‘Dio’, for obvious name recognition. And that we would all be writing the record together, and he said there was going to be no money in this- you’re literally going to get a hundred dollars a week, which we did. But he said that if this project is successful by the third album, we’ll make it a completely equitable situation. That’s the thing I never let go of, and people make it kind of a nutshell thing about money. It was never about money, it was always about principle to me, you know? I am a man of my word. When somebody looks me in the eye and shakes my hand and we have an agreement, I’d honor my end of the agreement. In a nutshell, the Dio’s did not honor their end of the agreement. To be honest, with the benefit of having many many decades of hindsight I can see exactly what happened. Ronnie never shared that information with Wendy, and Wendy never saw any value in the band. As far as she was concerned it was all about Ronnie, and that Ronnie could have any three musicians behind him playing guitar, bass and drums and it would be just as good. And the fact was that Ronnie knew that a band was a sum of the parts. The third album came and like I said Ronnie was in a very very dark place when he was going through the separation from Wendy and I talked to Ronnie at the start of the ‘Sacred Heart’ record and I said Ronnie, you know, I just wanna touch base with you about this. We’re on album three here…and up to this point bear in mind that the band has been very very successful. We’ve sold millions of records of which Vinny, Jimmy and myself got nothing from. We’ve sold hundreds of thousands of dollars’ worth of merchandise and t-shirts with our name, image and likeness on them which we got nothing. We’ve sold millions of dollars’ worth of tickets of which we got nothing. And we were being salaried less than the road crew. Which was all fine, we all agreed to work to this end because we all agreed that it was a labor of love, a passion project and we were invested in it because we knew that by the third album it would be an equitable situation. Because that is what Ronnie had promised us.

So I was the one, I had nothing to lose. I wasn’t married, I had no kids, I didn’t even have a home, I had no mortgage- I didn’t know any better. I just kept going ‘Ronnie we need to talk about this, we’re doing album number three’. And Ronnie kept saying ‘okay let’s get through the album and then we’ll sit down with Wendy and we’ll figure it out’. So we got through the album and we started rehearsals for the tour, I brought it up with Ronnie again- ‘Ronnie we really need to sit down and talk about this we’re on the third album’. He said ‘okay well let’s get through rehearsals. Once we’re on the road we’ll sit down with Wendy’. So we got through rehearsals, we go on tour, I bring it up again, he keeps pushing it off. And then there was a break in the first leg of the American tour and we were due to start in England so I went back to Ireland for them to transition so I could meet with my family. As soon as I got to Ireland I received a Fed-Ex contract from Wendy Dio. They offered me an extra few hundred dollars a week and they told me to sign it and return the contract, failure to return it within 48 hours would stipulate it- meaning I was no longer in the band. I tried to get Ronnie on the phone and he wouldn’t pick up the phone. That was it.

The next thing you know Craig Goldy is in the band and the band is touring England with Craig Goldy. Ronnie is making interviews in the press telling everyone I quit the band, which was absolutely untrue- I was fired from the band in the middle of the tour because I wanted him to respect his word. So, you know, at the end of the day it comes down to this- Ronnie didn’t have the balls to stand up to his wife. He didn’t have the balls to stand up to Wendy and go ‘this is what I promised them, this is what it’s gonna be, this is what it should be’. And frankly, I don’t think the band was ever the same afterwards. And I think that if Ronnie was still around and he were to be honest, he’d admit the same thing. I also think that if Ronnie was still alive and that if Wendy were not his manager, I would be playing with Dio again. I would have done it years ago. Wendy never saw the value in the band and at the end of the day she never thought it was worth it.”

You can read the rest of the interview with Campbell at Shut Up & Rock On.